Alli Sharma talked to Benjamin Bridges in December 2013 as he embarked upon some new techniques. He will be exhibiting at dalla Rosa Gallery, EC1 from 14 March 2014. 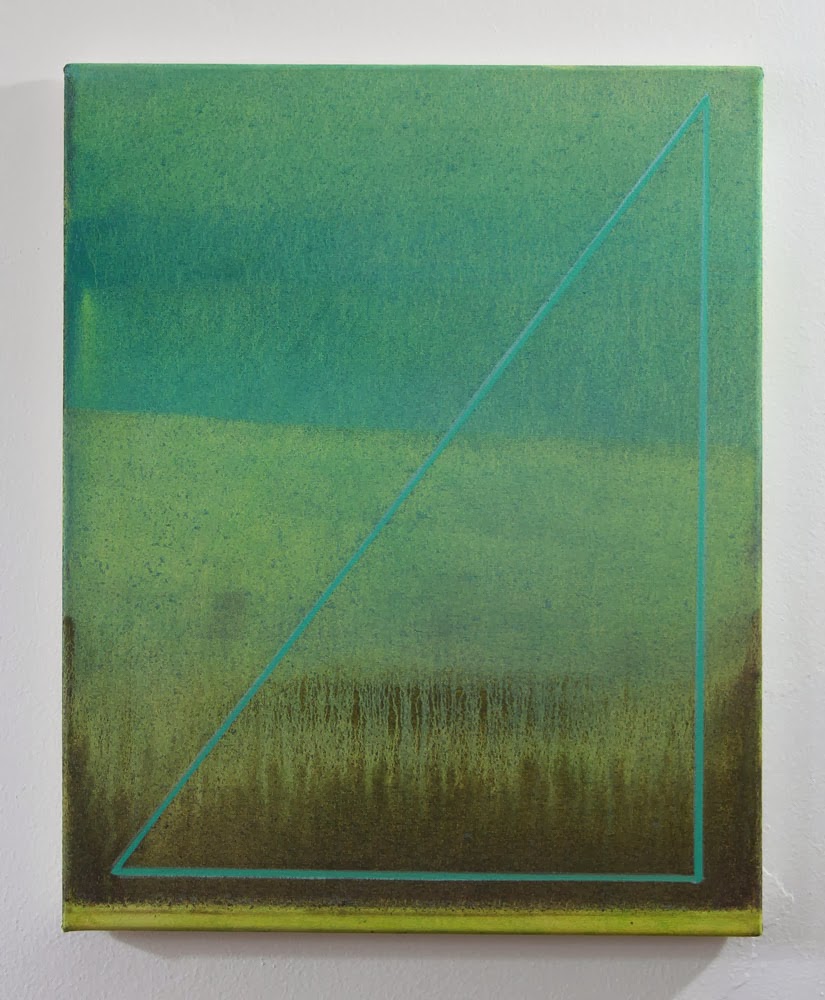 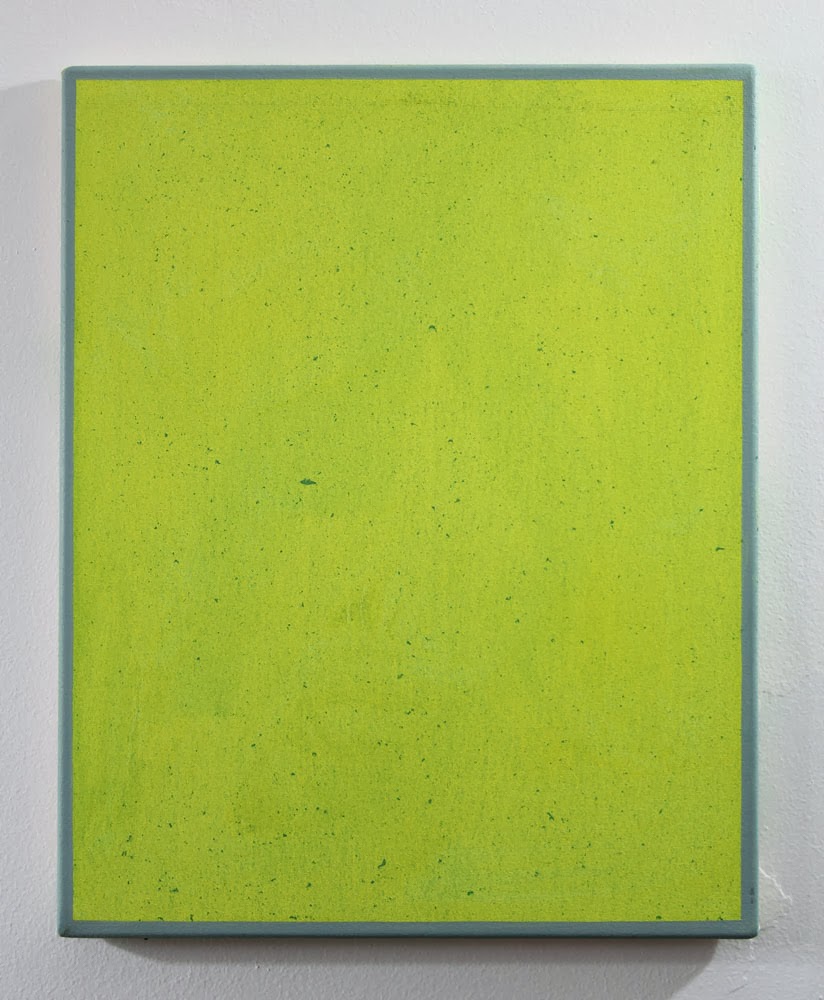 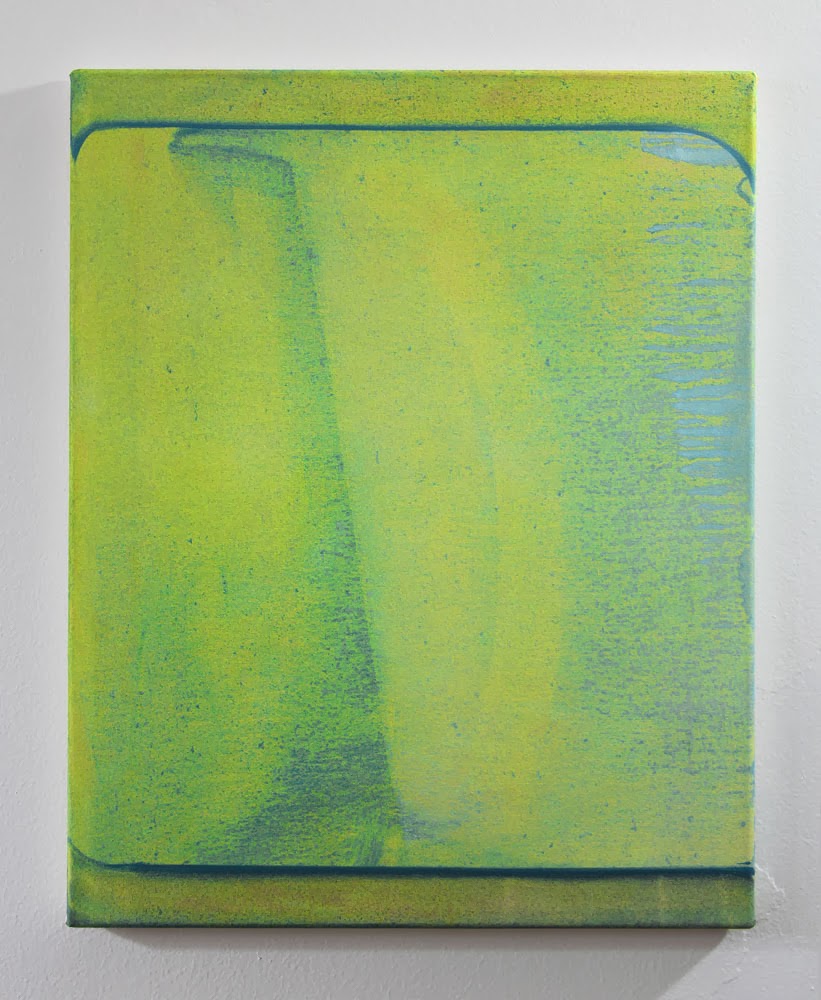 BB: These are a set of paintings where I found a new staining process. I’ve been making up canvases ready for paintings and I’m going to stain them in different ways. I cover the surface in paint and then I stand it on an easel with loads of tissue underneath and run stuff down.

BB: Yes, and because it’s white spirit and not turpentine, it splits like this. I have no idea what they’re about any more than what they are.

AS: The borders are interesting.

BB: I have been doing that a lot. It seems to lift the space. When you make a painting you start with nothing and sometimes the underpainting is really beautiful and then it goes up and down in waves. You try to leave the painting at that point where it hits the crest of the wave before it drops and you have to make it into something else. It goes from a fresh painting into something laboured, but more beautiful. You have to go through that process. If you can get within say 20 percent of the top you just stop because you know you can get it closer but you let the work go. So with some of these paintings there is just the stain of the original canvas and sometimes there are marks that keep being worked. Those pieces are often simple in the end but there is so much underneath that makes it something new. I was trying to stop early every time and I started thinking that I could do all of them really light, but in a set of things only two or three might work, and the rest don’t, so you take those further.

AS:  Have you moved away from the polyhedron-in-landscape paintings?

BB:  I reached a point where there was no energy to keep making the landscapes and they were becoming too similar. I like the idea that when I am 50 years old, I could paint whatever I want and so I decided to try it, as an experiment, and in a way it was damaging because when I started making these looser paintings, I couldn’t be bothered to make the polyhedron paintings any more because they are so laboured and these are so quick. I like the freshness of the newer works, but again, a similar thing started to happen. Because they were so quick and fresh and fast I would make lots but there was no investment. So they’re opposites.

AS: Completely different ways of making?

BB: The later paintings were all wet into wet, all one layer, very fast, rubbing bits out and painting them back. These first ones are very representational and I found this tedious. They might be a millimetre off on one side and then they just don’t work. What I discovered with the portraits, which I like, is that once you get the eyes, nostrils and mouth the right size, and the general position on the head, it just works and you can reduce and reduce and just have those pinpoints. So I trace the image on using those pinpoints and work from that. Because it has that structure and you can read faces so easily they just came together. In many ways it was about finding different ways of pushing the paint around, but having a structure to draw it all together.

AS: When you’re making a tight, specific painting, I imagine that you have a good idea how it will turn out. Was it a surprise to do something much freer?

BB: Definitely. In the polyhedron paintings, the composition was pre-determined by Photoshop with lots of layers, choosing even where the shadows would fall. The thing I enjoy so much about painting those is that the colour ranges would change so much and just become so different and that became a responsive element. But I started to feel that the way I applied the paint was quite stiff. It didn’t say anything about the way paint is.  When I started the portraits, I couldn’t tell where they were going. That was the beauty. There was room for that sort of experimentation, even with a structure and a guide. A lot of them are of my boy. He works really well for this because he was so tiny and the proportions of his face were huge. The paintings of adults are often much leaner so they become slightly quirky characters. Then, for example, for Major Melon, I started finding images online that had a particular feel to them.

AS: Were you looking for something quite specific in the images?

BB: Yes, but not something I could necessarily pin down. I have a very clear idea about what it is and why it interests me but there are a lot of things that I am painting at the moment. I look at something and it will seem really important. At University I had been reading books about the sublime and Edmund Burke, who was a contemporary of Kant, who wrote about the sublime being a dangerous immense presence that you’re able to be in awe of at a safe enough distance. At the same time, I discovered photos of volcanic islands forming near Tonga and I realised that when you see an explosion, it fits those criteria. If you think about how the world has changed over the last 20 years, particularly since 9/11, our worldview has changed and it’s down to those images. But I like the erupting volcano images because there is no malice in them. And there is a sense of them being an incredible force but it’s not about destruction, it is actually about creation. I have that kind of element when I’m working on those. I have that very clearly in my mind.  Some artists make the same thing, over and over, and there are subtle differences but they choose a narrow field. I know why people do it, it’s being specific and homing in on one thing but it seems so strange to me that that idea remains prevalent. It seems to be such a modernist idea of the artist genius that has one vision which has to be revealed, particularly when people are so varied with what they do and their interests.

AS: As well as the varied subject matter, there is a mixture of painting styles with the softer gestural ground and the graphic, hard line.

BB: One of the things I wanted to do with the new polyhedron paintings is just use one brush mark, wiped off, and then the polyhedron goes on top. They’re super delicate. You can scratch them with your nail, and they don’t work bigger than on really quite a small scale because you have to apply the paint so thin or it could peel off because it’s on Perspex.  A lot of the finish on these is a super mat varnish. It makes a huge difference. It brings everything together, particularly the blacks which are very carbon and dry. I use lamp black rather than ivory because it’s more consistent. And I like the completely flat finish.

AS: How do you get the surface so smooth?

BB: I just use very soft square brushes and build up the layers. That sky has got about 10 or 15 layers on it, which is why I was getting frustrated and ended up doing 20 minute portraits. I realised recently that I just need a mix. It really helps. I like making and sometimes if I’ve got the energy or drive to do it, I can work on something slower. This is one of the first ones that I did. A real sci-fi moment. I like this one because it is all imagined. None of it is from anything. I take a lot of photos when I’m away. My family think they’re not very interesting but that’s the point. I find a landscape where I think something is missing and I put my polyhedron where the thing is missing. That’s what I’m often looking for, that gap. This is Scafell Pike, that one is in the Alps.

BB: Yes, my parents used to drag me to the Alps when I was younger. At the time, I hated it and now I love it. I go all the time. I also lived in Austria for a bit, which is part of the mountain thing. I lived in a castle on top of a mountain. That was nice. 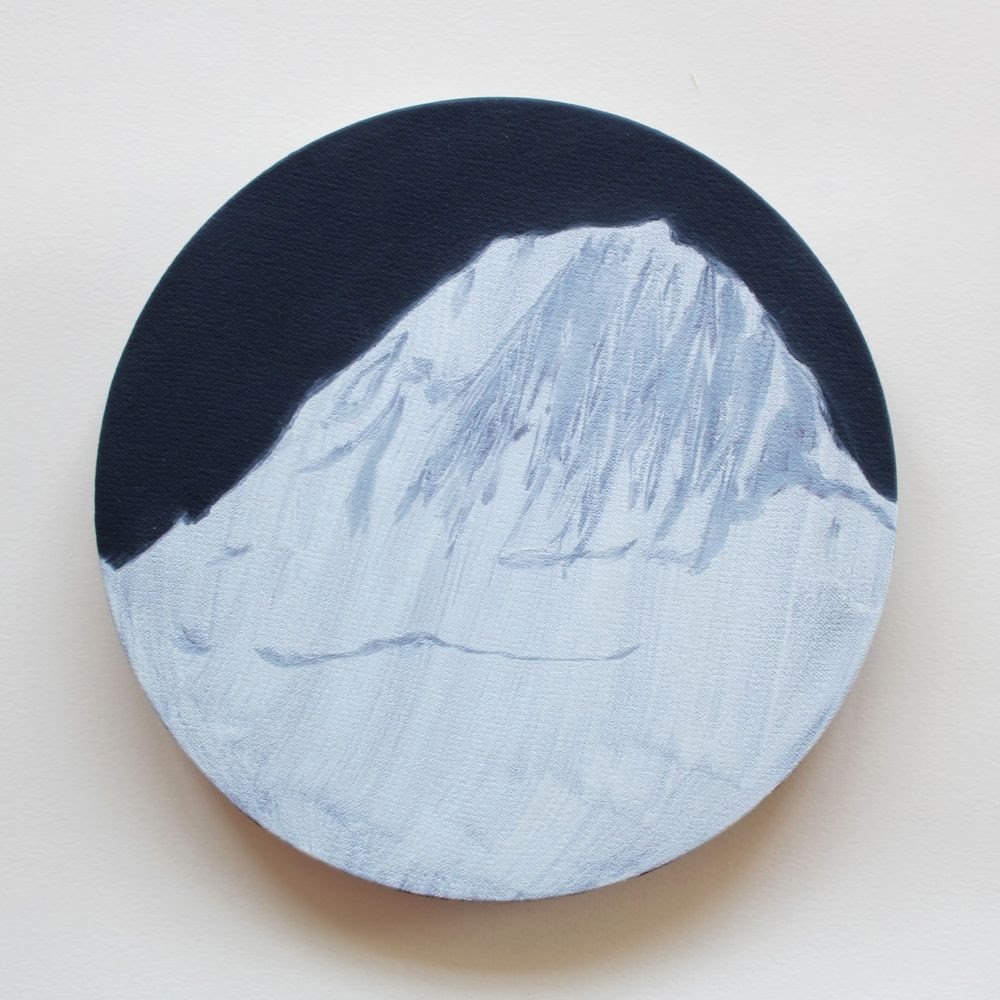 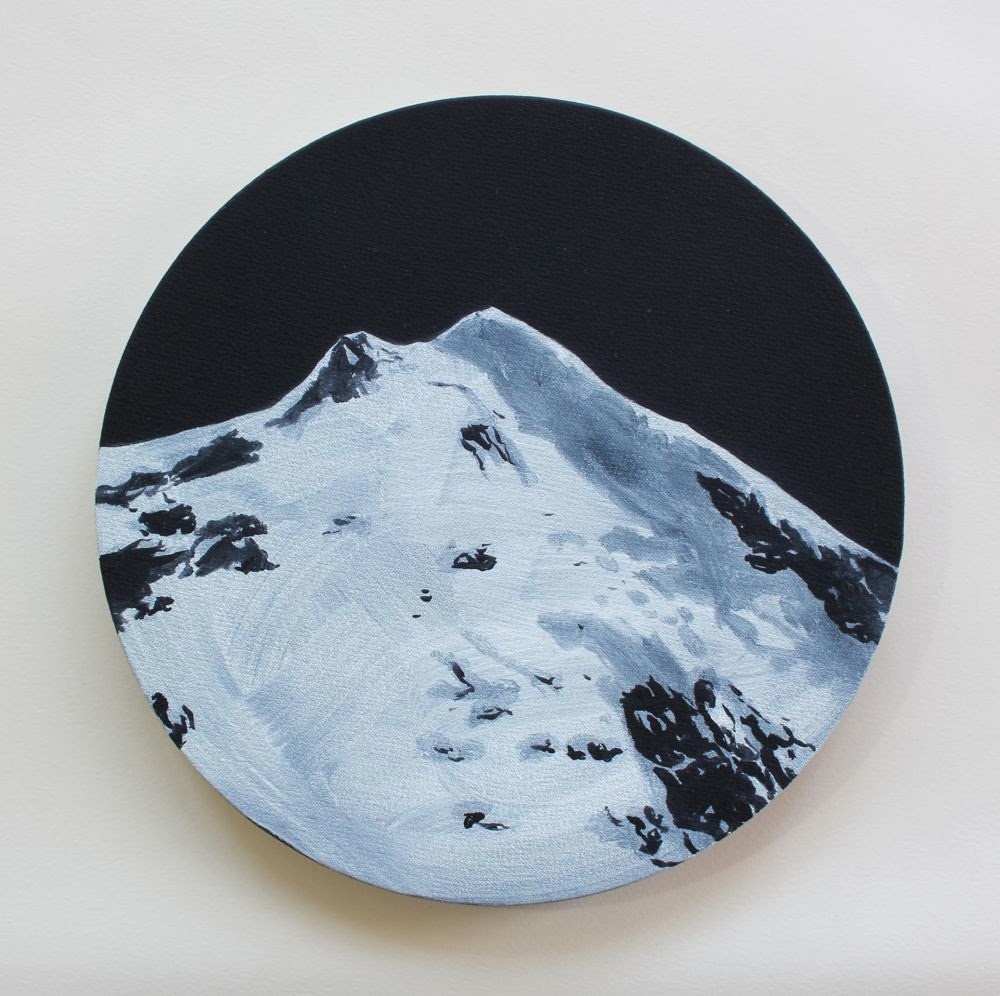 Posted by Articulated Artists at 01:26