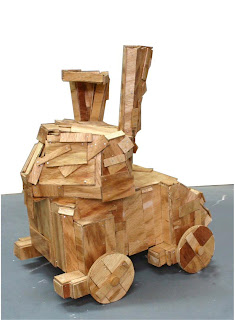 AA: You use many different animals in your work. For Heroes from History; The Rabbit Wars you’ve chosen a rabbit, why?

AG: I’ve been playing with rabbits for years. They’re always evil and menacing. I think I must have been inspired by Watership Down. At the time of making The Rabbit Wars I was reading a lot of novels about romance like The Time Travelers Wife and work by Murakami. I was thinking about the great romantic periods in history and that led me to the Trojan War. The Trojan Horse has crept up now and then in my work and the two things combined in a Trojan bunny with this idea of high romance and subterfuge. 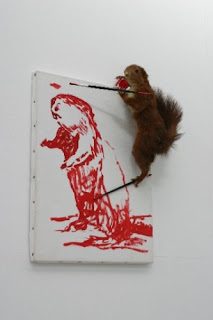 AA: To what extent is your work self-portraiture?

AA: Do you find it problematic using animals in art and having an anthropocentric perspective?

AG: I used to make abstract objects, just things stuck together to make poetic forms in space and then I was sent two fox skins in the post and the next thing I know I had a crudely stuffed fox playing golf. That’s where the animals came in and to a large extent the anthropomorphic side did take over. Now I’m trying to pull that back and re-cast animals as animals but within the human environment. Animals are so popular now in art. That’s fine because it’s the zeitgeist and that’s what we are thinking about so it only makes sense that it’s coming to the surface.

AA: So are you interested in the animals as animals or are you using animals to do something else?

AG: It’s more to do with our familiarity with animals. We’re not surprised to see an anteater or an aardvark or anything any more. We have such a post-modern familiarity with things that are actually alien to us living here in England. In a way it’s anti that. The work re-presents animals in order to see them again. There’s something about the banality of it all. Our relationship with nature has become so banal.

AA: I was looking at urban British bats recently; they’re amazing creatures. As humans we have the desire to invent Radar and Sonar but we could never actually experience echolocation the way a bat does.

AG: There’s a compendium of all the writings about our relationships with animals since Plutarch and the Romans up until now called The Animals Reader. It talks about how birds mourn when they lose their partners to what elephants do with their dead. It’s a great book.

AA: Perhaps when we look at animals we’re also working out what it is to be human.

AA: And you’re back to absurdity, recognising that and allowing it to be a helpful thing.

AG: I think that is quite important. 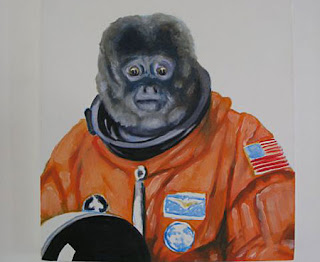 Anton Goldenstein is a multimedia artist based in Bristol. His work can be seen at:

Posted by Articulated Artists at 05:56 No comments: