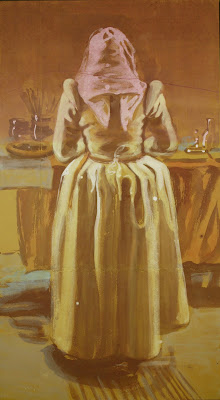 AS: You spent your weekend at a Tudor Group re-enactment event?

SH: Yes, we were doing a banquet in Haddon Hall, Derbyshire. I was working in the art department of the kitchen. On Saturday we made a pie in the shape of a castle with turrets and different fillings, like pork, pink custard and a strange 16th century pesto. Then on Sunday other members prepared a pig’s head by slicing off the face from the skull, sewing it back up, stuffing it and then boiling it for 3 hours. I then painted the head black with lard-bound charcoal and finished with marzipan tusks, eyes and a bristle brush comb so it looked like a wild boar.

AS: It must be amazing to have access to fantastic Tudor buildings.

SH: Yes, and we stay the night after the public have gone. So for breakfast this morning I had a lovely sour bread baked in a 16th century oven, actually, I think it was a 15th century oven.

AS: Are there lots of artists in the group?

SH: There are crafts people and photographers but then there are also accountants and IT people. And loads of kids because there are lots of families which is really great. People become expert in baking, leather work or ironmongery, all these things and, much like my approach to painting, they’re experimenting with materials, looking at what’s written at the time, but also by the act of doing, finding out what actually works. 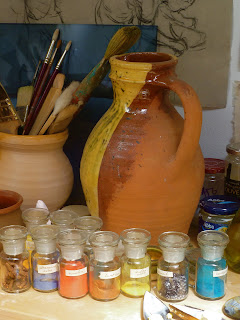 AS: You make your own paints from pigments?

SH: I don’t make my all own pigments. I don’t make vermillion because it’s mercury sulphide. It can be synthesised but is also naturally occurring. You need a kiln to heat it, so in this period it would only be made industrially, not by artists themselves. That would be something they would go and buy. But yes, I make all the paints and all the pigments that artists would have made in the studio. Here I’ve got some madder, which is a pigment. I can pour that out so you can see it better. It’s made from madder roots.

AS: What is madder?

SH: It is an uninspiring looking plant but you grind up the roots and soak them in water. Heating it up turns it brown so I do it by soaking it in water with lye over a period of days works and you can see the dye coming out. These are birch leaves, they have their own smell. It smells tobacco-y. This is weld. It smells a bit pissy. My dress is dyed with weld so I like that the dyes used in the clothes are the same colours as one would use in some of the pigments. That’s fascinating. The world joins up.

AS: How authentic are your socks, did Tudors wear knitted socks?

SH: Yes, they wore knitted socks. There are all sorts of inventories. They also wore sewn fabric socks but I prefer knitted. You do find examples of things although socks don’t massively survive because they’re a bit throwaway. I didn’t knit these but knitting is one step too far for me. I sewed all my clothes. 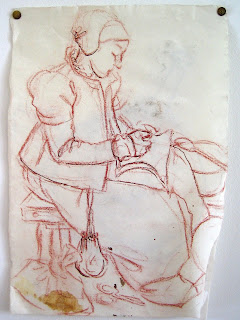 AS: You hand stitched them?

AS: Who makes your shoes?

SH: In the world of re-enacting, you get people who make shoes, or pottery and they supply re-enactors from all periods.

AS: Do you need help putting on the corset? You’ve been trapped in there all weekend, was it uncomfortable?

SH: You get used to it but if you eat too much you suddenly want to get out. The key to wearing a corset is that you shouldn’t lean onto it. You should avoid it pressing onto you. I wouldn’t be surprised if it wasn’t always worn by working women. Trying to ascertain Tudor working clothes is a lot harder in Britain, than in the low countries, because there wasn’t the interest in painting them.

AS: You mean peasants?

SH: Peasants or even just working class. I’m not interested at all in the gentry with all their silks. I find that the least interesting.

AS: And well documented?

SH: Yes, they’re the ones we have paintings of in Britain. In this period in the low countries, there is an explosion of genre painting and it’s all linked-in with the birth of capitalism. The merchant classes and the stock exchanges began there and they were the new patrons of art. Before that, it was just aristocrats and the church interested in mythology, the bible and history painting. With the new middle class merchants, the new patrons of art, you get landscapes, peasants, still life, domestic scenes and artists specializing in different niches. It’s the predecessor of the art market we have today where artists have to specialize and find an original niche, which is their selling point and where art is about ourselves. So that’s part of my reason for painting these images. It’s actually the root of contemporary art. There’s a great irony, artists painting peasants only because of urbanization. 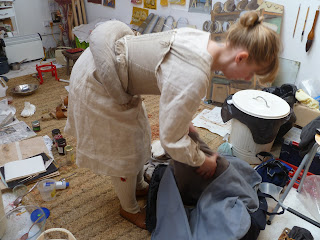 AS: You’ve just given yourself an extra bum bit.

SH: Yes, the bum roll, because in Tudor times, the question of ‘does my bum look big in this’ the answer you want is ‘yes’. You might have to give me a hand with tucking in my partlett. This was made of fine linen and used to fake being clean. You would have lots of linens but only one set of woollen clothes, and a Sunday best. These knives are my eating knives. You don’t have forks, that was a poncy Italian thing. So you cut and spear things and eat off your knife. They’re hand made by a guy in the group. So the final bit is my coif and then we’re done.

AS: Did you dye the fabric?

SH: I didn’t, that was a member of the Tudor Group. The thing about dying is that you need large facilities so that the wool can turn around and not get streaky so it requires a lot of space and drainage and some heat underneath it. However, someone in the group is setting up one in their garden in London so I’m hoping to go and dye some stuff so I can do it myself.

AS: Are you busy at the moment?

SH: Yes, I’m going to a gallery in China in August, I’m working with Vitamin Creative Space. They’ve planted Chinese indigo for me so hopefully when I get there that will have grown and I can harvest it to make some pigment. It’s in an urban farm in Beijing. 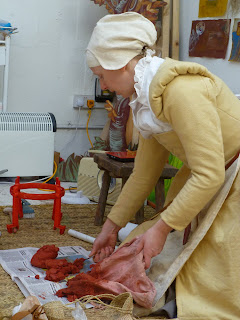 So, this is some gorgeous looking Madder. The crimson draperies in old paintings would be made with this.

AS: It’s a beautiful pink. It doesn’t look that colour in the tube?

SH: You get different shades. This was an experiment where I put in alum first, and then added potash. That means you get a warmer colour. I’ve made madders where I’ve made a cooler colour by putting in potash first and then added alum. They’re the two ingredients that you can play with when you’re making Lake pigments like this. Potash is alkali so it would be made with wood ash but it makes things cooler. If you think about litmus paper, the acid colours are red and yellow, and the alkali colours are blues and greens, purple so it works like that with these natural dyes.

AS: So what will you do to this madder now?

SH: I’m going to let it dry out completely and then I’m going to grind it up and wash it to take out any excess alum. 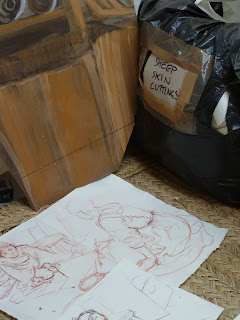 AS: You’ve also made your own paper from sheets?

SH: Yes, I have some here, with printed woodcuts. So the paper is made from my bed sheets. I burnished it but it still smells of my sheets.

AS: How do you go about making paper?

SH: First I cut up the sheets into one inch squares. You need a beating machine. In the 16th century you would have had large water powered ones where a big wheel powered by water sets off a trip and a big log comes down and pounds rags to a pulp. 16th century paper was made from the rags and scraps from linen and hemp fabric. Much like the pigment made from scraps of wool, you make use of a left over material. Once you can’t repair the linens any more they might as well be made into paper. Rag pickers were making a living by collecting rags from people and selling them to the paper mills. They were worth quite a lot in the end. Since I don’t have a beating machine, I send my rags off to a workshop in Glasgow and where it is beaten for me and the pulp sent back. I’ve got vats and felts and a friend who is also making paper to collaborate and share materials. We’ve made a press out of an oak frame and a hydraulic car jack because you need to squish all the water out to get it as smooth as possible. Then dry it. Because I was doing woodcuts I needed a smooth surface so I burnished this particular paper with the back of a spoon. I do have a burnisher at home which is agate but just rubbing a smooth hard thing across the paper will give you a bit of a sheen. 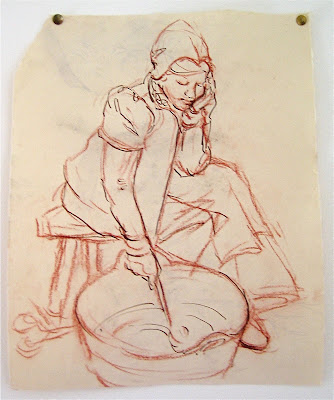 AS: Are these drawings on paper of people in the Tudor Group?

SH: Actually this is my apprentice. I’ve been inundated with offers from interns, which I think is indicative of young students these days feeling pressured into doing internships. I didn’t think I needed an intern because I like doing everything myself but then I thought it might be quite a good idea to play with the idea of having an apprentice and that relationship could be a body of work.

AS: She looks pretty fed up in this one. I wonder how many students imagine interning would involve stirring a pot in 16th century costume. 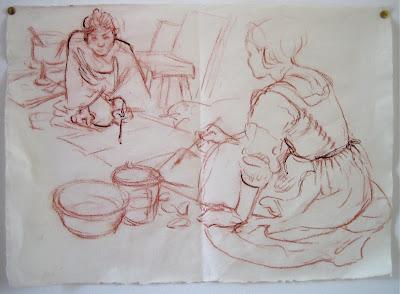 SH: I did explain! But yes, I think what has come out of the experience is a series of drawings that show the difficulty of the relationship. This is another student from the Ruskin and we did a painting circle, she grew up in Japan so she wore her kimono and we all painted each other. The idea is a women’s painting circle. The kimono is a lovely thing to draw. It’s more interesting to draw a kimono or Tudor clothes than jeans.

AS: It’s interesting, how artists choose to present themselves, as artists.

SH: It is, and the mystique of the studio.

AS: Most artists are open about their practices, but I can imagine some wouldn’t want us to know their secrets, and why should they?

SH: For me that’s quite important, I like to share recipes. It very much relates to movements such as relational aesthetics, where it’s about making work that deals with social exchanges that go on around art. Painters can seem isolated, stuck in their studios on their own and I think of my practice as fighting against that a bit, making it a more social practice. I also know other pigment freaks and we swap pigments... I’m not the only one! 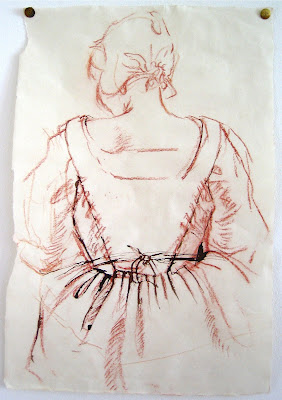 Sigrid will be working in The Pavilion at Vitamin Creative Space, Beijing from 29 July - 27 September. For more information, follow The Astonishing Adventures of Lady Indigo. Resulting work will be exhibited at Annely Juda Fine Art next year.

Posted by Articulated Artists at 04:04 No comments: