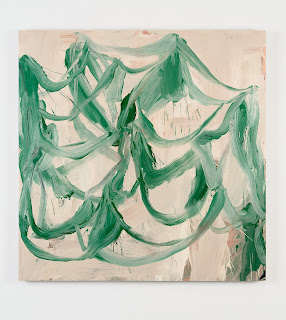 AS: I find it difficult to talk about abstract work and I was wondering why I’m a little bit scared of it.

AS: I like that, being in-between. I suppose I mean the connection between your work and its historical relationship to Modernism which is something I don't really know much about. So, thinking about how to talk about the paintings, they seem excessive and yet at the same time, controlled.

CC: One of the frustrating things when I look at other painters today is how mean they are. They use paint in a very reprographic way so it looks second hand; it’s very flat. I think their vocabulary is narrow and I’ve worked out what they’re saying in two seconds. On the other hand, we’ve got this tradition in this country of these older generation artists like Frank Auerbach who grew up on Abstract Expressionism and they’re so worthy and hard won. It’s tedious. My starting point has always been the material itself. I think the beauty of paint is that you can really push it and you can use it to excess but you can also get some great subtlety with it. I mean it’s not formless. My work isn’t formless. There is a great deal of control. I think that’s what gives the paintings tension. I’ve gone back to drawing with paint so it’s allowed me a greater freedom. I don’t want to restrict myself to any one element, not the paint, the colour or the drawing but just all three things working together. 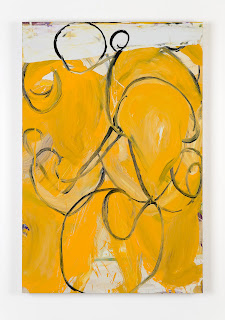 AS: Drawing is important in your work, are you talking about mark making, the line?

CC: Yes, essentially I’m thinking about the line, the gesture and also the form. In this painting called Fountain, this yellow form behind looks quite voluminous and shapely, then on top of that I’ve got a line here which is also a gesture so it’s like a tight-rope walk with those three things. In Butterfly, it’s equally a gesture and a line but I don’t want it to be figure and ground so I don’t want it to sit on top. Drawing is where I start, literally by moving the brush around as I would a pencil. I’m really stuck with this new painting. I don’t know what I’m doing. But this is where I get to, an impossible place, and then I just have to let go of all my ideas because they’re useless. And the paint won’t do what I want it to do. But then, at that point, when everything collapses, somehow I make this space where I let the work go and something happens. It’s really difficult to explain because it’s not a zen moment or anything like that. It’s just really tedious getting there.

AS: How do you recognise that something is working?

CC: Things just fall into place, it seems easy. I don’t really know how that happens. I’ve never met an artist who is able to explain that. It’s kind of an intuitive thing and an experience thing. Because I’ve been painting for years, I’ve built up this experience and it kind of just accrues and then eventually you’re able to recognise certain clues.

AS: Is it exciting when that happens? Is that the driving force that keeps you going?

CC: Yeah, it is. It’s almost like a chemical release in the brain. It’s just fantastic. I like to think that’s near the end of the painting and then I’m able to finish and usually I’m unable to stop looking at it, that’s an indication. All of the paintings in my San Francisco show are real ground breakers for me. I just couldn’t stop looking at them. I mean all I really know is that if I persevere then I’ll come up with a good painting. I’m not sure how that happens. I’ve thought about it and I’ve tried to write about it. Really it’s trial and error and looking and thinking. 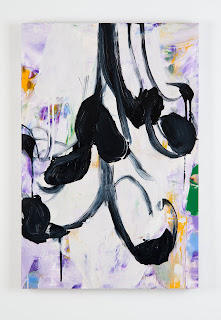 AS: Tell me about your titles, ‘Garland Broken’ for instance.

CC: ‘Garland’ is a beautiful word. For me, it can mean something celebratory or melancholy as in a funereal sense. And the word ‘Broken’ next to it is quite clumsy. Heidegger said that ‘the world reveals itself when functional assignments fail or are disturbed’. You might be hammering a nail in a wall and maybe the hammer breaks and at that point you really understand the world. So I was thinking about things breaking down and the idea of broken. I was thinking about my work just hanging there. I wrote down everything just hanging, which is imminent, about to happen, coming into presence, forever delayed, the idea that there is that continual delay.

CC: As if gravity itself is going to pull it off. I don’t really know about the subject of my work. I wish I knew more about what the heck it was, apart from all those concerns I’ve been talking about which are very real and valid. What we should do here is have a chat until we’re both really bored and then start to record it, a bit like the painting I’m stuck on, because by repeating something and trying to get the essence of it, it’s submitted into boredom and then it becomes something real and interesting.

Posted by Articulated Artists at 13:51 2 comments: