Jake Clark talks with Nick Nowicki in his Camberwell studio. 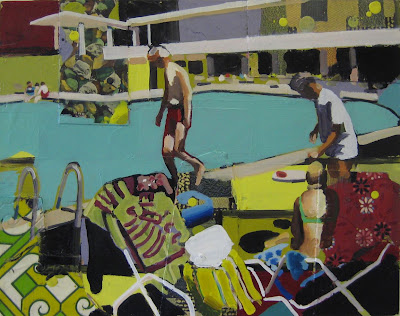 NN: Have you specifically referenced imagery to get a particular palette?

JC: I go to seaside towns in England, and take pictures. There are certain colours I’m after which are to do with being by the sea. They’re more faded because of the light and salts, and also slightly decayed and rusting. I bring the photos into the studio and then into the paintings. So I combine images from different sources, posts from Margate and a house from Cornwall.

NN: Do you ever do any painting in situ? 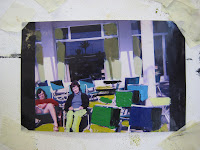 NN: You could still paint over a painting that you’d done on location.

JC: I think it’s to do with the fact a machine has made this thing and it's concrete – it's there. And you know the source material actually exists. And it’s the quality, the tonal thing. It’s always about the harsh light. The strong shadows make the light even more obvious. Edward Hopper often used a diagonal shadow moving across to suggest the idea of time passing, a clock moving round.

NN: Is the Lino usually around the edges and at the corners of your paintings?

JC: It goes to the painting edge, nearest the wall, so you become more aware of it, as well as relate it to domesticity. When I’m painting, the canvas is on the floor, so I’m aware the Lino is where it might have been originally. Lino has a history. People have walked on it for fifty years. It's been in a flat or kitchen and when it becomes part of a painting it gets thrown into a different scale. There’s an intense, domestic pattern and then a tiny figure next to it.

NN: What do you think is the result of that contrast of scale?

JC: Playing with scale is to do with confusion and fragmentation. If you’re hot and hung over and look up at a hotel and then down at your flip flops and up again, that jump of scale is to do with the way your eye and mind work in that sort of experience. 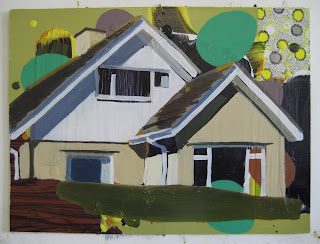 NN: Every subject in your work is bathed in sunlight.

JC: Harsh light, strong shadows, and with the figures I’m trying to get the idea of everything vibrating, everything shaking, with the denseness of people and the heat, all moving together.

NN: It’s not the colours doing that, because your palette is muted and grungy. You’re getting the sense of this more from how it’s been combined.

JC: Those juxtapositions are what I’m trying to do with the Lino, that idea of something ridiculous, that counters the setting, undermines whatever you’re representing and plays with and against that. Sometimes it can suggest architecture but it’ll always be a ridiculous pattern. The word ridiculous is important. 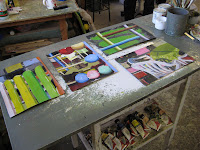 JC: I like ridiculousness as a thing in life, contradiction, counteracting something, laughing at something, revelling in melancholy. I find it positive. It’s not about celebrating the past. It’s about revelry in the misery of it. I like going to Southend because it’s miserable, but exciting as well. It’s charged and feels very much on the edge. You get the train to Great Yarmouth and it’s the last stop, and there’s all this flat land and it’s quite nondescript and then you get to this full-on resort on the edge of Norfolk and suddenly it’s really exciting. Someone asked me about Martin Parr – is he mocking the people that eat ice creams in New Brighton? But I like to hang out in those places. The sea erodes as well. All these bungalows have painted gables, but they’re faded by the sun and rusted by the sea salt. It speeds up the aging, an anti-polished, anti-newness. Shabbiness is interesting. Maybe paint is like that. It’s shabby. I’m interested in the shabbiness it can capture. The medium is quite dirty. This is my palette. 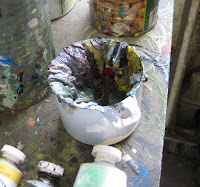 JC: That cup sums up why I want to paint these subjects and not just leave them as a photograph. After the Rubbernecking show at Transition, LondonPainting did a blog about it and someone asked, ‘Was gestural painting the right sort of language for this sort of subject matter?’ I was interested in that comment, because for me it is important that they are paintings, gestural, layered and visceral. I think they were saying that someone like David Rayson or George Shaw, paint houses blandly and it’s about emptiness and photographic stillness. I’m interested in the emotional impact and how the house has history and all this stuff has gone on in it. Although it might be empty now, the paint rejuvenates all that, and I thought why couldn’t my house be painterly? Why couldn’t something that’s meant to be quite bland, still, flat and static be rejuvenated? By painting a house like this, it's trying to access all that emotional memory of people that lived there in the past – or also the idea of the perception, as I’m running round with a camera on a hot day and it’s all shifting about - what it's like to be there. 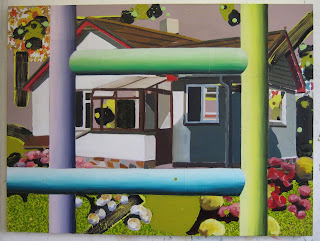 NN: A brushstroke seems like a simple thing, but it’s loaded with the humanity of doing it. But I can see what you mean about being in a suburban place and even if there’s no one about, it never feels completely still, because of the awareness there might be people inside going about their own private lives, and the sense of people that have been there in the past.

JC: Also you’re moving around it. A lot of these houses have been built for the car.

These suburban places can’t exist without the car. This is not a townhouse, it’s not a Georgian house in Islington, it’s an isolated house in a cul-de-sac where the car is how you get to it, and so most people see them from a car anyway.

NN: I wonder if there’s any other sort of ways in which the presence of an abstract pattern works that we haven’t got to yet.

JC: The punk thing of rejecting convention and wanting something annoying, disrupting the picture, something that shouldn’t be there, that most people think of as ugly, an ugly/beautiful thing. Most lino has a disgusting pattern. There’s been time enough for it to become aesthetic again, but at the time it would be seen as naff and a lot of people still see it as ugly. The painting shouldn’t work because often a quarter of it is a pattern, but for me the challenge is in trying to find the image that will fit with that domineering, nasty pattern. It might get buried slightly but its always going to be there, part of the painting. As the Lino is the first thing I glue down, it’s like an anchor to the painting that I’m always referring back to and fighting against, and it’s important to me to have that kind of tension, rather than just the white canvas. Most important is the atmosphere that comes through. The Lino starts that journey of suggesting the atmosphere I’m trying to get by being from those places, from that period of history. Also the Lino or the posts become part of that trippy perception of a place and how, if you look at the sun and then you look back at something, you get all these funny prismatic things going on, sort of flashing like a migraine. The patterns function that way too, like a vision thing. 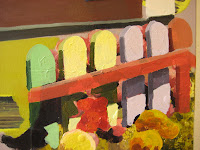 NN: I’m fascinated by the multicoloured fence. Despite all the gestural colours that interweave, they’re still related to the colours you might expect the house to be, but not the fence.

JC: I see the fence as a cartoon language. The Lino is a cartoon language, too. It’s got an outline, bright and comical. I did a number of house paintings with these egg shapes and the fence is a continuation of that, cartoony and sharp. Again, something you wouldn’t normally want to be there, like the Lino, a funky kind of thing that breaks it up. This summer at Latitude festival I did an art installation of paintings. Because I had to hang paintings in a tree, I did something quite loud and different from what I’ve been doing. 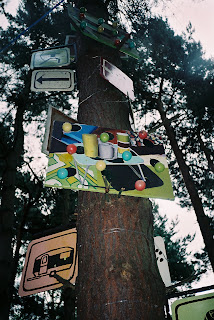 NN: You’ve taken the golf-ball type things that you painted in the past and made them huge and they’re no longer tied to reality. The golf balls were quite explainable, but these are more like the buds of a tree, or every ball that’s ever been thrown and there’s been a time warp and they’ve all appeared at once. 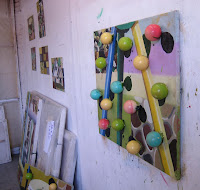 JC: I like that. These are signs I painted pointing to things you couldn’t do, obviously, being a festival. You couldn’t actually go there.

NN: And this time you’ve painted a scaled up representation of the Lino?

JC: Yeah, these objects are quite big. If the Lino was stuck on that, it wouldn’t work, so I’ve blown it up. I imagined a campsite with pine trees, a resort no-one used anymore that I stumbled across, with derelict buildings, fences and funny bits of architecture which had been overgrown and left –a playground, a swing, a concrete picnic table, close ups of this fantasy setting triggered by seeing pictures of the wood and thinking what could have been there. The memories were from childhood – I was brought up in Majorca. I suppose it was a bit of a joke, because, going back to ridiculousness, I thought about festivals and music and camping and what people are there for, and I threw this concrete ugly resort in the middle of it all via painting just to annoy people. 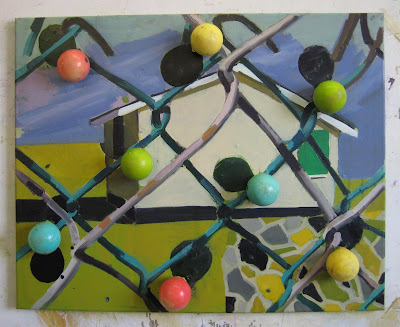 I liked the idea of people going, ‘Oh god, this is a bit ugly.’ But for me, it’s not ugly. I was contradicting what was there. I wanted to have people take their pictures in front of it, as though it really was a resort sign. The paintings had to be quite loud to work in that environment, which was all very dark and woody. Kitsch ugliness - taking Majorca to Suffolk. 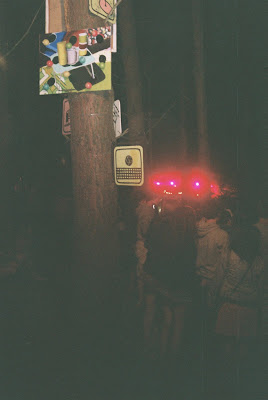 Posted by Articulated Artists at 14:52 4 comments: