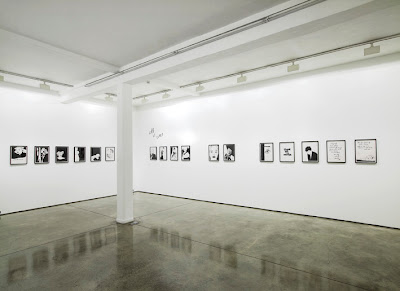 NN: Do you favour a particular type of sketchbook?

DU: I always use A3… is it Daler? There’s something really familiar about that brand because I remember using it at school. I always used black ink and brush; I haven’t really changed.

NN: Is it Chinese ink?

DU: It’s Indian ink. Chinese ink comes out matt. Indian ink has a shine that I like. The thing with using ink is it’s got to be flat. You can’t have it on a wall or it’ll all run down and I could only really go as far as my arm would reach. I find an A3 sketchbook on my lap the best way to draw.

NN: ‘Why Bother’ is acrylic on canvas. 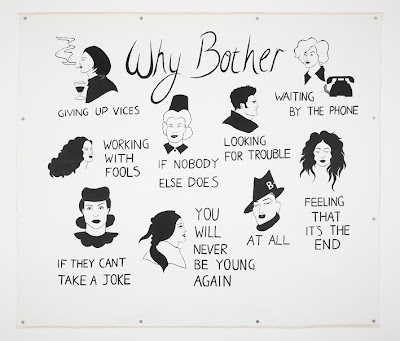 DU: And basically I can bang nails into that and paint it flat on the wall. It could be stretched afterwards but I quite like these bolt-things, the grommets, so you can stretch it on the wall.

NN: You incorporate text with images, which can be difficult. How did you arrive at that?

DU: I don’t know. I used to write for magazines. I used to be a journalist so I find writing comes really naturally and then drawing the words that I write is just an extension of that. 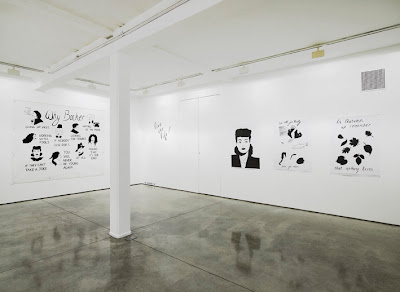 NN: When an image is made bigger, it can look contrived. It’s not the easiest thing to do.

DU: People ask if my wall drawings are laser-cut transfer. But why draw a picture and get a laser-cut transfer of it when you can just go to the wall and draw it by hand? You’ve just got to concentrate. I use a tiny brush, 0 or 0/3, to get the outline really sharp and then fill it in with a larger brush. Usually I can’t be bothered getting off the ladder and I do it all with a little brush. I swear a lot when I’m doing it.

NN: You’ve put in some…they look like school images, I’m not sure.

DU: Oh the self portraits. I think when you look at old pictures of yourself it doesn’t actually look like you. You recognize yourself, but you’re remembering yourself, aren’t you? You’re not really seeing yourself. You wonder is it really a picture of you. Sometimes I see old pictures and I don’t see myself at all.

NN: So what made you think of using them this time round?

DU: I wanted to do portraits of people I know, like my family and friends and then I decided to start with myself, do a few self-portraits and see where that takes me. So I dug out old photos. I couldn’t face sitting in front of a mirror and actually doing a picture of me now. That one I’ll get round to one day. 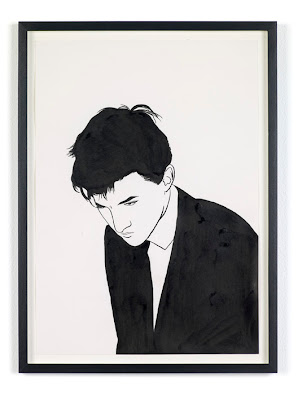 NN: That’s you as a moody youth. That’s definitely not a school pic.

NN: You look like Elvis, or maybe even Morrissey.

DU: It is a bit Elvis-y that one. Someone else said that. The chin’s too pointy to be Morrissey.

NN: How do you come up with the titles for your drawings?

DU: The titles for all these Bette Davis ones are quotes from Thackeray’s Vanity Fair. I’ve just illustrated the whole book. There are, I think, 41 drawings and they all relate to specific lines. The book doesn’t really tell you her age at the end, but I thought to make the character, Becky Sharp, get more and more warped and wasted. I thought I would have her go from 16 right up to 70 years old.

NN: You’ve invented a world where Bette Davis is playing her? 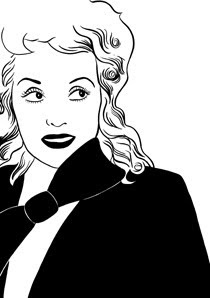 NN: And where did you get all the images of Bette from?

DU: Oh my god. Well I pause-framed films and then I got books with loads of pictures of her and then I looked her up on the internet. But it was strange, I had to start with an image of Bette Davis, maybe in a fur coat holding a cigarette and then change her into a slightly period Becky Sharp. It’s meant to be set in the Napoleonic wars and I don’t think she smoked. It doesn’t mention smoking in the book. I altered them all and I made a motif of bows, on her hair and clothing.

NN: Have you mixed them up in the show and ignored the narrative aspect?

DU: Yes, I’m really just showing images. There are 52 images in the whole show, so I put them in two groups of 26. I wanted the show to look a bit like a schoolroom, with instructional diagrams, a really sick school. You couldn’t teach a child using a Joan Crawford alphabet. I thought I’d make it formal, with pictures of people from history, and you might get a poem up on the wall. That’s in my mind. What other people see - I don’t know if they’re going to get any of that

NN: What do you think is the difference between the photocopies and the hand-drawn pieces?

DU: I feel a bit of liberation seeing things blown up large and I’ve always used photocopies. I could have put these up as silk-screened prints in a frame but I think there’s something more relaxed about photocopies. I mean, I’m showing my drawings – it’s not like I’m having a sale of luxury goods. It’s nice to show the originals but I think a photocopy is quite unpretentious.

NN: With those jokes, not jokes exactly but, is it like making notes and it all comes together in that moment as you get the idea? 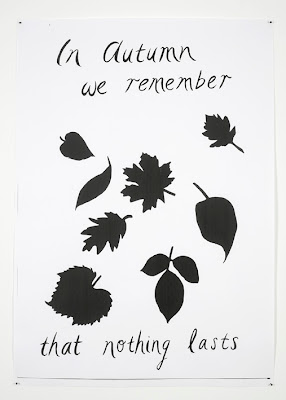 DU: If I come across a funny idea in my mind, something that I think’s quite witty and has humour, I write it down or make a text message on my phone so that I remember it and then, when it comes to doing drawings, I look at these ridiculous notions that I’ve had and pick the ones that…

DU: Still make me laugh or that I think are worth putting in an image. These are like something from a Ladybird book, a Learn-To-Read book. They’re bittersweet. You wouldn’t tell a child that ‘in autumn everything must die’. You’d have ‘in autumn we dance in the leaves’.

NN: And they’d be more colourful.

DU: Yeah, they wouldn’t be black, that’s for sure.


‘Bi’ is at Maureen Paley and Herald St, London E2 until 23 May 2010.
www.maureenpaley.com and www.heraldst.com

The new edition of Thackeray’s ‘Vanity Fair' featuring Donald’s illustrations will be published by Four Corners Books in September.

Donald Urquhart will be showing at Galleria S.A.L.E.S., Rome, in the autumn.
www.galleriasales.it

Images courtesy of Maureen Paley, London, with thanks to Patrick Shier.
Posted by Articulated Artists at 10:32 4 comments: