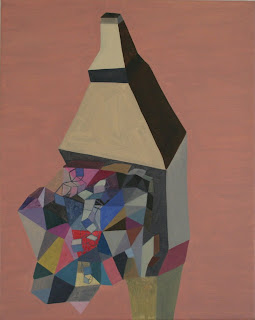 AA: Louisa, do you use images as a starting point for your paintings?
LC: Well, a lot of it is taken from imagination. But I tend to get a lot of ideas from 1960s architecture, like Archigram and post-war. Usually, I play off personal experiences in the City but there might be some buildings that I'm interested in so I have a starting point and then I try and push away from that image as far as possible to create my own constructions or worlds or mind spaces.
AA: What is Archigram?
LC: Archigram was a British architectural group in the 1960s. Peter Cook and Ron Herron came up with these mad, different ideas to what was going on in architecture at the time, away from modernism, you know. Quite simple but bonkers ideas that were never actually realised. For instance, Ron Herron did this kind of walking city. They looked a bit like ants and they had eight massive legs and they were quite pop or comic book looking.
AA: Is there a time you can pinpoint when you became interested in architecture?
LC: I would say since I was in my teens. During my BA I became very interested in the suburban setting or playing back to past memories. I started painting roller coasters, and playgrounds, and structures that looked like they were going to fall apart; creating and inventing these shapes and putting them together and it started from that. I think at the Royal College I went a bit off the rails.
AA: Off the roller coaster rails?
LC: (laugh) yeah, off the roller coaster, and then it came back again and I realised, you know, what was I interested in, what were my primary concerns, what is this about.
AA: Your buildings look anthropomorphic. I was looking at that painting in particular with the pink ground. What is it called?
LC: Ah yes, "Foundations". Now, I was thinking again of temporary architecture. The Metabolist Movement were Japanese and they built a tower in Japan. They are modular constructions, like units that you build up and add on. I was thinking about trying to build my paintings and have these constructions coming out and they tend to become, yes, anthropomorphic. I try to play with that and create some sort of humour with it.
AA: The triangular pattern you've created in "Foundations" kind of reminds me of a geodesic dome structure, but collapsed and I was thinking of collapsing modernist utopias. Is that something you think about?
LC: Buckminster Fuller. Yes, I suppose I am interested in those kind of utopian ideas, like with Archigram. Everything seemed kind of sunny and optimistic but these utopias haven't worked. And, having my own experiences in the City perhaps rubs off on the work with a negative slant, perhaps, I don't know. I made some paintings of protective suits. I had a sort of fear of walking around the streets by myself and being female and I imagined if you had these suits on they could fire out things at people. I mean harmless things like paint or peas or something like that. So yeah.
AA: So you haven't always lived in a City?
LC: No, I originate from Northampton. Mostly I grew up in the countryside.
AA: I remember the work from your Royal College show and it looked quite gestural compared to these paintings. The actual handling of the paint is quite different.
LC: It was my first time living in London and I was really sensitive to what was going on around me; and everything being really fast. For some reason I think I felt that that was something I had to do with my work.
AA: Painting fast?
LC: Yes, I needed to get it out. So much so that at the end I started using acrylics because I enjoyed how fast the paint dried. But, to be honest, I think I'd lost who I was and what I was about. I'd just been to Latin America and I'd been blown away by Latin culture. I started getting interested in that, trying to be something else. But I think I needed to do that in order to get here.
AA: The marks in these paintings look confident. It's like you make a mark and that's it, it stays. Is that how you work. Do you paint over things?
LC: I do, but I often rub it out as well. So I work on it, if it doesn't work I rub it out, start again, paint over it. I think I've become more confident at that. I used to think that it must come out first time, first time, nothing else. But now I've learned to maybe have hits at it and if it's unsuccessful wipe it out and do it again.
AA: So keep at it until it works.
LC: Yeah, I'm being harder on myself I think.
AA: I was wondering how the drawings and paintings relate to each other. Do the drawings lead to paintings or are they something quite separate.
LC: They tend to play on both really. I've always found that drawing comes very naturally to me, on the bus or wherever. That's usually when ideas come. I draw something; a structure, an object, even a person and so I usually have that. And then I transform it into painting. But then, sometimes I do also create the drawings during painting. They could just be more successful than my paintings and so they play against each other.
Skyscrapers Under The Sea is at Madame Lillies Gallery, 10 Cazenove Road, Stoke Newington, London N16 6BD from 6-15 March 2009.
www.madamelillies.org
www.louisachambers.com
Posted by Articulated Artists at 15:45 1 comment: 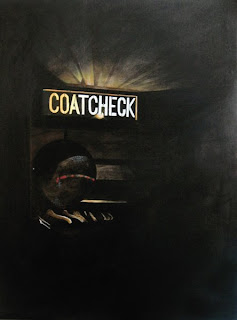 TD: Actually, I do have an archive of hundreds of photos that I have taken. I always take my camera around with me and often take pictures of places that are quite well known, like the Bowery Ballroom in New York, and other entertainment spaces. So they do have personal memories but they're quite generic as well, yeah.
AA: I looked at some images of your earlier work and your seaside paintings look like light and happy places. Some of these later paintings are quite dark and sinister by comparison.
TD: Yes, I did a whole tour of the British coast and that's where I collected a lot of images. Even though there were quite grey skies when I took the photos, I would transcribe them into painting and put blue skies on them. I kind of shifted my view from that way of thinking and that kind of hope and it naturally shifted into a darker space.
AA: Were you interested in Britishness? Is that something you think about?
TD: Yes it is. I mean I've done this whole kind of tour and it's about what I know of Britain. I didn't go on holiday as a child so I don't know where my passion for these places is coming from. It's some kind of faded nostalgia of something but I don't quite know what.
AA: It doesn't appear to be a very grand notion that might sit with traditional stately homes, cricket or green and pleasant lands.
TD: It's quite a down to earth view of Britain. I grew up in a steel town in Lincolnshire. This painting here is called "Steel Town". The steel works was the backdrop to my hometown. I could always hear the grinding of the erm ...
AA: grinder?
TD: (laugh) yeah, the machinery, and the chemical air was orange in the sky. It's a strange thing that Britishness because a lot of the imagery that you see from the seaside has originally come from the US. Similarly with music, I remember thinking that I don't want to like any American bands. I always followed British bands and was very like, I'm not going to like that; I'm going to like this, and I was quite strict with myself about it. But I realise that a lot of the things that I celebrate in the British seaside actually come from US 30s and 50s architecture.
AA: And your paintings are devoid of people. Are you trying to capture a particular atmosphere?
TD: I suppose that allows people to remember something for themselves. Subconsciously, I didn't realise that the paintings didn't have people in them and then people kept mentioning that fact but I thought they were about people so ...
AA: You mentioned nostalgia earlier. Your paintings make a connection with the past and an idea of memory. The term "nostalgia" can be derogatory in art and I wondered how you felt about that.
TD: I suppose as time goes by I like to think of seeing soul in something. Something that was "proper". Say, cars on the road for instance. I used to love seeing old cars and now you don't see them often. It does seem strange to look back but I think I'm searching for some kind of character or soul.
AA: Now, I'm looking over your shoulder at the painting of a half-submerged submarine. How does it fit with the other paintings?
TD: This is the last painting I made for this show. We had been thinking for a long time about the show "Skyscrapers Under the Sea". Water and light seem to be themes that come up in my work. I've recently started to read about divers and their explorations underwater with diving bells and diving equipment. Jacques Cousteau actually writes really beautifully about his explorations. It's amazing; the way he describes things. And I try to go to some kind of imaginary place and think about those things as starting points for painting.
AA: There is something quite theatrical about the work too.
TD: Yes, it varies within the work. They often seem staged because they're made of different components. My work is about many things, some abstract, some spiritual. There are a lot of paintings that are not here which are varied. I've also made some paintings of dresses.
AA: Yes, the 50s ballroom dress, I've seen that painting. What is it called?
TD: "There Ought To Be More Dancing".
AA: Your titles are interesting.
TD: The titles are something I think about a lot. Sometimes they are collected phrases, something I've seen somewhere. Sometimes the titles add humour or suggest the passing of time or something. They vary. When they come they are right and they stick. The skirt imagery keeps coming back, as well as the underwater and the kind of light and place and theatre. There is a piece that I haven't made that I would like to make which is a corridor of crinoline skirts to walk through. Often there is a feeling of suffocation in some of the pieces, like the bell jars.
Skyscrapers Under The Sea is at Madame Lillies, 10 Cazenove Road, Stoke Newington, London N16 6BD from 6-15 March 2009.
www.madamelillies.org
www.tamaradubnyckyj.net
Posted by Articulated Artists at 14:29 No comments: