David Harrison in conversation with Nick Nowicki at his studio in Angel, N1. 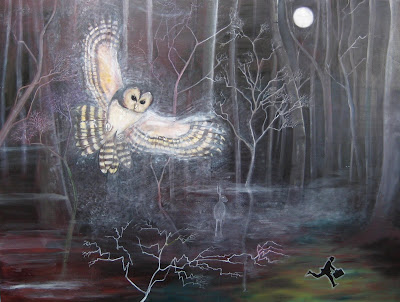 DH: This is the latest painting I’ve finished.

NN: Someone is peeping out of the trees, or something. 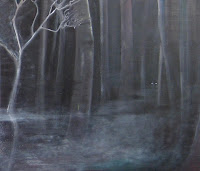 DH: It’s not made clear what it is. It’s the unknown watching. I’m thinking of calling it They’re Watching or They Watch or Do Property Developers Dream Of Electric Trees? I love the idea that we’re being watched all the time by nature. There are probably spiders and insects or mice sitting here now watching us. Man thinks it’s getting one over on nature, but in his darkest dreams nature can come back to get him.

NN: How do you approach composition when making paintings?

DH: I never really do. I just go for the picture and it seems to work its own composition out. I like to play with composition, take risks, put things where they shouldn’t be and make them work. I always like to put the dominant figure, like the owl, off-centre and uncomfortable. But after doing that I have to make it so your eye then travels round the painting to what the centre of focus is pushing you towards. So I painted the white zigzag in the foreground to lead your eye to where the owl is focused, which is on the running man and, in doing so, you see and feel the trees, the hare, the businessman, the watcher, the moon, and it all connects. So I think that’s how you work out composition. 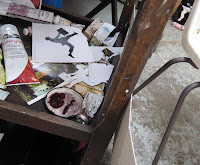 DH: It’s on wood. Most of my paintings are on wood.

NN: How does the surface affect what you’re doing?

DH: I love the surface. I love the wood grain coming through. I love little holes. In fact, that’s how the yellow eyes in the trees came about, because there’s a puncture-hole from a nail. I have to prepare the wood, because it can warp badly, so I hammer in stretchers and cross bars to the back. Then I prime it with clear glue so bits of the wood come through, and then, when I’m painting, it guides me where I think, ‘that’s looking like part of the sky so I might leave that.’

NN: The people in your paintings seem to be imbued with magical properties.

DH: Nature is magical and we are part of nature so we’re part of that magic and we shouldn’t step out of that otherwise it’s working against what we are. No-one really knows what we are anyway. Things happen in nature that are unexplained and that’s magic. If people say magic doesn’t exist they should go into a meadow and sit there for an hour and see what happens. There’s always something else in the air. You can actually see atmosphere. Playing with perspective helps create that atmosphere in my work. There’s no such thing as a perfect perspective because everything moves, your eyes don’t just sit and look. We’re created with an eye that’s not a machine, it’s an organic moving object and we’re floating through space and time with nature. 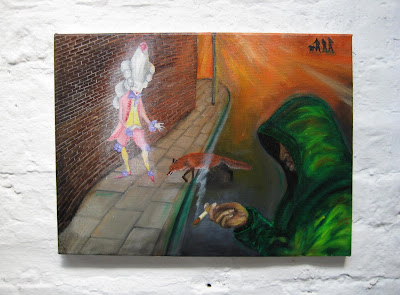 NN: You’ve warped the perspective in this one. Is it new?

DH: It’s fairly new. I’m not quite sure if I’ve finished it. It’s called The Living and the Dead. It doesn’t tell you what’s the living and what’s the dead. You have to make your own mind up about it. This is an 18th Century Macaroni. They were the fashionable young men of the day and dressed, like the Renaissance paintings they saw, in beautiful velvets and frills. They used to wear powdered wigs that were three feet high. 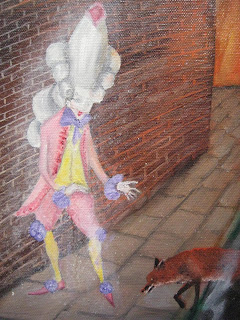 They had an attitude – they never wore watches because they could do what they wanted, they weren’t beholden to anyone and didn’t have to be anywhere. They were rich and just walked around in the latest fashions; and they shocked their parents apparently. The Macaroni could be a ghost, and the fox could be the go-between two worlds where nature sees all. Foxes are like ghosts around the street. You see them and then they disappear before your eyes. They sit and wait and look fantastic and then every time I get my camera out, they’re gone. How do they go? This is a street. Where have they gone? The foreground figure is the fashionable man of today, an image of threat. He’s almost a ghost. The green colour is mostly compositional. I wanted it to fight with the other colours. So he’s not got his true colours on. Is that an ectoplasm colour? Is he living or is he a ghost?

DH: I drew that in first. I’ve been doing sketches of walls. I like the way brick work moves and it still keeps its geometry but you can put an organic shape in as well. What I might do is quieten it all down by putting a wash over it. Victoria Miro came and said, ‘Don’t touch it; leave it as it is.’ Sometimes, I’m blinded by what I’m working on. This was a quiet picture and it became garish to me; I get confused by the two worlds and two states of mind. I worry about changing states of mind rapidly. I’ll take it down and leave it on its own and look at it by itself.

NN: Is hanging them in this arrangement informative? 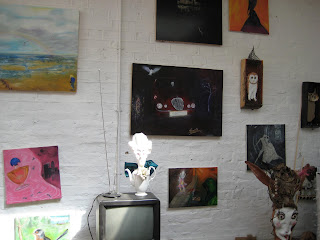 DH: No it doesn’t help. I need to put them in my viewing space just by themselves.

Sometimes I might take a week to paint a picture, then leave it for a week, paint some more, work on something else while I leave it up there for six months, and in another few days finish it. I suppose the leaving time is part of the process of painting. I’m still painting that picture even if it’s on the wall for six months so therefore the mental process is part of the work. Some of them are put away for a couple of years and then I get them out again and finish them. I always try to make something of what’s there. I never like to write something off completely. It’s wasting too much time. The older you get the more aware you are of wasting time. You just feel you haven’t achieved, so you’ve got to make this kind of real statement about yourself. 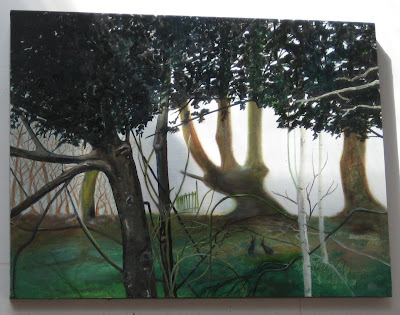 The Gate is another one I don’t think I’ve finished; I was wondering whether to have the hares white. It’s a landscape painting of a real place, but how I think it should be. I took photos of the trees, copied from the photographs and then put them away and thought about how I felt when I saw the actual trees. Sometimes you look at the photograph and it doesn’t look like the tree you saw. It’s best to get the essence of a tree rather than the look of it, because everyone sees it differently. At first I thought the gate was standing on its own, but when I looked closely there was a fence of very thin wires, which didn’t come out in the snapshot so I didn’t put them in. The gate becomes this pointless object, but it looks beautiful. It’s the idea of no boundaries.

NN: Do you listen to music when you’re painting? 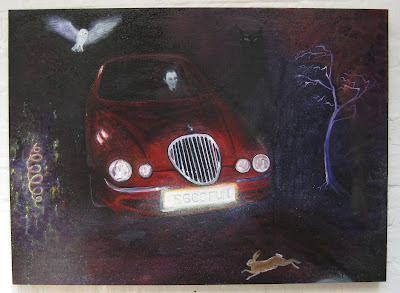 DH: Music is a strong influence because you go with the mood of it. When I was painting The Mystic Spiral I was playing Gong – a very old hippy band I’ve always followed since I first saw them in 1970 in concert. The painting is about when I was in a medieval village in Somerset. It was twilight and very creepy and it was Halloween. And I got lost. I’m walking down the street feeling spooky, but enjoying it immensely, and I pass a tower, which was known for devil worship, and then bam in the middle of the village is this blood red Jaguar. It looked so weirdly out of place, but in place. And the registration number is S666FUN. I was like, ‘I don’t believe this!’ I photographed it so people knew I wasn’t lying. I waited for someone to come – I wanted to know who owned this car – I wanted some tall, dark stranger to come out and say, ‘Get in, you’re going to be sacrificed!’ but nothing happened. That’s Mikhail Bulgakov sitting in the car. I got a picture of him from the internet – film star looks, very gaunt and pale. He wrote a novel called The Master and Margarita, which has been a big influence on my work. It’s a book about seeing the dark side - a comment on the politics in Russia in the 1930s. Stalin was killing people, only in the book it’s the devil making people disappear, but, because of communism, no one is allowed to believe in the supernatural. 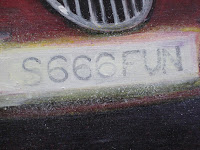 And then, of course, I needed a focus of where the car’s going to go, so I put the hare in to balance the picture. The hare is a sign, when it runs down the middle of a road, which it never does usually, that disaster is going to happen. The cat formed in the paint washes and so I painted it in. Whether I was looking for it, or not, I don’t know. I wanted to put something in that didn’t make sense, so I started to do that colourful little display – Hollywood-looking ghosts as they appear – and I wrote 666 in a shadowy form so you couldn’t see it, and then as I was doing it I heard this mystic voice at the end of Gong’s new album saying ‘Welcome to the mystic spiral’ and I said, ‘Oh that’s perfect, thank you! That looks like a spiral, I’ll join them together’ and I made a spiral.

David Harrison will be showing in the forthcoming portrait show at the Victoria Miro Gallery, London N1, 22 June - 30 July 2010.

A limited edition print, 'City Gent', to accompany the book, is also available.

Posted by Articulated Artists at 22:04 9 comments: