Rose Wylie at her studio in Newnham, Kent with Alli Sharma 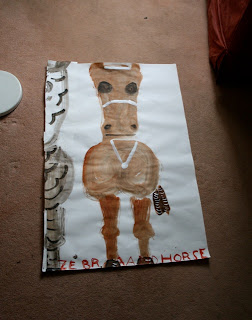 RW: I wanted to show you a horse. This one. Where shall I put it? On the floor? There’s something about its chest and the stupidity of it. I like the zebra beside it. It’s a take from de Chirico. I like his Metaphysical and early work.
AS: Is this your recent work?

RW: It’s very recent. The Jay isn’t quite as silly; it’s more charming. I work on thin, cheap paper and it wrinkles. Sometimes I slit along the bump of the wrinkle and put something underneath and stick it down.

AS: And what about the paper pieces stuck on top?

RW: Those are corrections or changes, which is why they keep getting thicker.

AS: Shall we go upstairs to your studio?

RW: Yes, it's in tip top condition because I'm not painting in there at the moment. This is a painting that didn’t make it into the current show at Union Gallery. I was sorry to leave it out. It’s Valeria Bruni Tedeschi, Carla Bruni’s sister, in the film ‘5x2 (2004)’. She’s being raped and rammed up against a pillow. She’s beautiful but her face looks terrible because she’s hugely distressed - a very nasty scene. It’s an extraordinary image of her and that is what I was trying to do. But I’m having enormous trouble with the painting. I thought it looked like her face has been scissored off. I tried a soft, curved face but that was awful. Then when you put the eyebrow on you can’t curl it round because it looks like the face is in space. But it isn’t in space; it’s pushed into a pillow. So the eyebrow has to go off the forehead and you can’t curve the forehead because it’s in the pillow. I’m not drawing a factual pillow; I don’t want to do that. I could have written ‘pillow’ and crossed it out. I thought it looked easy to do but it wasn’t, at all. I’ll probably repaint this side again. It is possibly a huge failure; I’m still working on it. 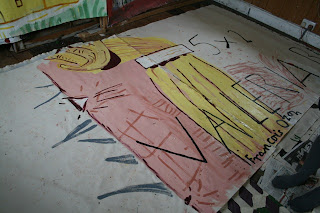 AS: Is that how it works for you; you see an image that catches you, which you picture in your mind, and then make the painting of how you remember it.

RW: Exactly, and there’s no research after that. I don’t look at stills. I started with ‘Sitting on a Bench with Border’. Then there was a gap. Then I did the big head, with arms ‘Battle in Heaven (Film Notes)’.

AS: She looks like she’s got her arms around something.

RW: She has; it’s oral sex and the man is standing in front of her. The film director, Reygadas, did this scene at the beginning of his film ‘Battle in Heaven (2005)’. It’s not all about oral sex. But at the end of the film he shows the same act from the front, or the side view, which is very explicit and it’s hard to take because it’s so focussed and direct.

AS: Is ‘Japon’ by the same director?

RW: Yes, he deals with huge subjects; salvation and guilt for instance. He’s very visual. I also made ‘Silent Light (Film Notes)’ with the two Mennonite houses from his film ‘Silent Light (2007). That was surreal; the two houses just floated into the shot. The Mennonites are a German religious sect and they moved to South America and Mexico and retained their puritanical, ordered life. They’ve all got to be identical; no individuality. These are not two beach huts. They’re two identical houses which are not grand; they’re austere and unpretentious, built by their owners. So that’s what those two houses are about.

AS: The green of those houses crops up a lot in your paintings.

RW: It’s a tricky colour because I don’t like bluey greens. I like yellow greens. There’s a lot of green in medieval stuff, which is yellowy. I think the Royal College of Art had a very blue-green time in the 1960s and all the RCA students I knew went in for that colour. I never liked it. Later I studied drawing at the Royal College, from 1979-81, and then moved onto paintings.

AS: In the recent show at Transition Gallery you had the canvases stapled to the wall. Do you prefer that? 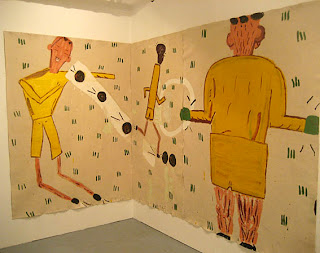 RW: Yes, I like it. I have shown unstretched paintings quite a few times in various places but some people won’t have it.

AS: Perhaps if the work is for sale then people want to buy an object and they can’t see it otherwise.

RW: They can’t see it, unless it’s stretched. They don’t want to bother about transporting it but obviously you could staple it to any old wall. I sent some work into the Turner Contemporary Open in Margate last year. The curator was from the Baltic and Martin Clark, from Tate St Ives, was a judge. They said I could staple them to the wall and send them on transit stretchers because I’d put it in the application.

AS: You do stick them directly onto stretchers sometimes.

RW: I stick them onto a strip of canvas around the edges of the stretcher. Everything on the painting shows on the front. It’s quite difficult to do.

AS: Yes, they look imprecise. 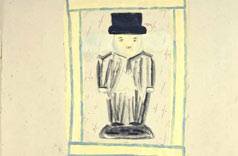 RW: They stretch unevenly when you size them. And they stick out where you staple them up so when you measure them they’re not precise.

AS: This one looks more like your work on paper. Obviously because of the pencil and charcoal, but also the collage. A sort of hybrid.

RW: I like to see the flipped up edges of the collaged bits because they make small shadows. The frame around the Fat Controller used up a whole pencil. It doesn’t take, unless you use a good artist’s crayon. Cheap pencils evaporate. Because I use cheap paper in my drawings, people ask if I use cheap materials and the answer is no. They’re not cheap materials but they look as though they might be. 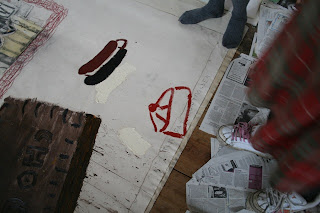 AS: Maybe that’s because of the attitude you have towards your materials. You’re not exactly precious with them.

RW: I don’t like to think of the cost of something. I prefer it to come from Woolworths or WHSmith but if you do that then after a few years it disappears. This one is part of four I was going to show together. The idea was that Blair was a fat controller. He tried to control fat by giving children no chips, do you remember, with Jamie Oliver? There was that business about England being the fattest country in Europe. It was gross. It was a pun on the children’s toy Fat Controller and the description of Blair, the fat controller. It’s about obesity and control. In this painting the Fat Controller doesn’t really look like the Fat Controller but I like those thick charcoal lines. I used to draw like that a lot. Now I work with thinner, hard pencils. I visited Patrick Heron in the West Country before he died. He was just about to have a big show at the Tate. He showed me and Roy a few things. The only thing I liked was a drawing of a boat he’d done when he was 12. I loved it. It was done with a hard pencil. And that clinched it for me. I loathe arty materials. That’s why I like cheap paper. I like cheap everything. I like accessibility. I’d like pictures to be cheap. But if you have cheap pictures nobody wants them. I think they should be available. Rothko wanted his work to be available and they became extremely expensive and unique and he didn’t want that.

AS: You think that’s beyond your control? 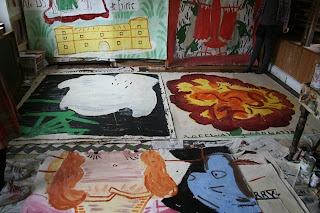 Rose Wylie is currently showing 'Film Notes' at Union Gallery, 94 Teesdale St, London E2 6PU until 13 March 2010.
www.union-gallery.com
She has also been selected for Women to Watch at the NMWA in Washington, DC in July 2010.
www.nmwa-uk.org
And will be showing at Thomas Erben Gallery, New York from 25 Feb - 3 April 2010.
http://www.thomaserben.com/index.php#biographyRoseWylie.html
www.transitiongallery.co.uk
Thanks Cathy Lomax for studio photographs and input.

Posted by Articulated Artists at 17:09 7 comments: