Harry Pye talked to Articulated Artists on Thursday, 2 April, about his new show. 'Getting Better' is at Sartorial Contemporary Art, WC1 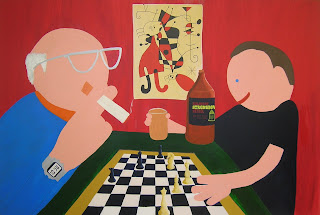 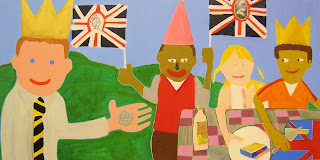 HP: I've got these photos of me at primary school and we had a street party, which now seems unbelievable. Do I remember it, I don't know? But I remember being told about it from the photos and that made me think I remembered it. But then in actual fact I've blurred two memories because the coin I was given was actually from the 1981 Charles and Di wedding. I thought that coin was worth enough to buy a house and the fact that they were handing them out to everyone didn't seem to matter. I lost it playing football and running around and bawled my eyes out. Then this girl, Sophie Newman, said I could have hers and I slowly realised it wasn't worth much. In the show, next to 'God Save the Queen', is a painting of Ian Dury.
AA: You've made him a saint.
HP: Yeah, well that was one road that the show was going to go down. I was thinking that I could have saints and a word of wisdom from each one. With Ian Dury it's this thing about 'don't feel sorry for yourself'. That's what I get from him. Because he had polio and various things and he just said you've got to get out there and be wonderful. Likewise, Lynval Golding from The Specials has a scar down his face from a racist knife attack but he was able to find it in his heart to forgive. He always said that he wanted racists to come and talk to him and get to know him and find common ground. There's a painting of Jerry Dammers in the show called, 'Enjoy Yourself - It's Later Than You Think' which is one of the songs he and Lynval sang with The Specials. So, it was nearly that but I just didn't do it. But I never ever had any religious beliefs. I never found the bible stories very touching. I always saw a flaw in them. I think about how I bear grudges over people for the smallest things. But then you realise that so many people put up with so much more - and achieve so much more. 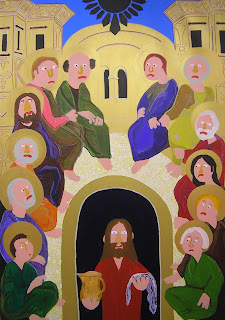 AA: You describe yourself as an atheist and I'm curious about the religious images in your paintings; 'Jesus Washes The Feet of his Followers' for instance.
HP: There is a really nice old painting of Jesus having his feet washed and I liked the perspective.
AA: That is an actual existing painting? Who painted it?
HP: It's by an unknown artist.
AA: Jesus looks so chuffed to be going to do this and his disciples look really uncomfortable with the whole idea.
HP: That was the key thing. The people who were told about Jesus wanted him to perform miracles and he came along and said 'consider the lilies' or 'it's easier for a camel to get through the eye of a needle than for a rich man to enter heaven' and they were furious. He said to the disciples and fishermen 'I am never more important than you and to prove it I'm now going to wash your feet' and they all said 'oh no, please don't'.
Do you know the Woody Allen line from Hannah and Her Sisters? This guy has been watching a TV evangelist and he turns the set off and says 'If Jesus came back and saw what's going on in his name, he'd never stop throwing up'. In the last few years a lot of Tony Blair and George Bush type people are claiming religion. I saw George Bush on David Frost's In the Morning programme and Frost was saying 'there are some protesters outside the building now' and George was saying 'I don't care about them I just listen to the man upstairs'.
It's a Christian virtue to do as you would be done by so I was trying to think of a way of getting some of Jesus' messages across in a powerful way so that people would say 'oh I agree with that'. Maybe it's slightly patronising. Obviously, some peoples' knowledge of Jesus far outweighs mine.
AA: I saw George Shaw talk last night at Wilkinson Gallery. He talked about Ash Wednesday and linked his show to the religious calendar - it runs for the period of Lent. He also said that he 'had no contribution to happiness whatsoever'. You seem to be at the other end of the scale. Your show has a really happy vibe.
HP: Good. That's what I wanted. There is a cliche about how the best work comes from the artist's tortured soul and I was thinking this last year or two, being invited to Brazil to do a solo show and problems within my family resolving themselves and my sister having a baby and blah blah blah. Things are pretty good now and I can't complain. I admit to being a late starter but I think I'm starting to get less selfish, less bitter, less rude and as a person and as an artist I am slowly getting better.
'Getting Better' is at Sartorial Contemporary Art, 26 Argyle Square, London WC1H 8AP
25 March - 18 April 2009, Tues - Sat 1.30 pm - 7 pm
www.sartorialart.com
Posted by Articulated Artists at 14:13 2 comments: