Laura Oldfield Ford in conversation with Alli Sharma after her talk at Tate Britain, London on 7 December 2009 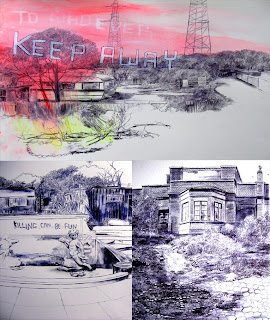 AS: When talking about your work in relation to John Martin’s ‘judgement pictures’, you touched upon the romanticism that exists within your own work but seemed a little reluctant to go there.

LOF: There’s a lot of political weight brought to bear when talking about historical movements like Romanticism, so in a way I’m trying to avoid taking that on. There’s a difference between the way that I romanticise my subject matter and the romantic idea in art history as contextualised in front of those paintings. Certainly, my work is shot through with some sort of desire or idealised portrayal of aspects of the city, which can be read as problematic. But I like to set that against the bleakness or melancholy aspects of the architecture that I describe.

AS: To me, that is romantic; the way you look at the architecture in it’s decaying state.

LOF: What I find interesting about architecture steeped in that patina of decay is to do with what happens to those spaces when they’ve been subverted? How do they change as people adapt them to their own needs? I’ve always found that interesting about large planned estates, garden cities or post-war new towns. Whether that’s people changing the appearance of their front doors or adding nomadic architecture, caravans and building sites to the edges of those places. 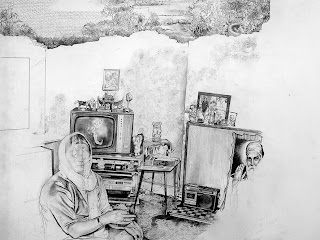 AS: You seem focussed on the architecture of a place and not particularly on the people. You said you were becoming more interested in individual stories.

LOF: It’s definitely there, most obviously in the writing for my zine, Savage Messiah. I try to coax out hidden narratives or stories so you get fragments coming from different characters. They’re loosely based on people I’ve met.

AS: How far does your research take you? I imagine that you take your camera on walks around the city. Do you talk to people too?

LOF: I take thousands of photos so editing takes up a lot of time in the process of making the work. I talk to people on estates where I’ve lived. At the moment, I teach a drawing class with old people in Kilburn and I talk to them about what Kilburn used to be like and listen to their experiences of living in that area and what it was like living in Paddington during the war. These kinds of conversations provide me with background material for the work. 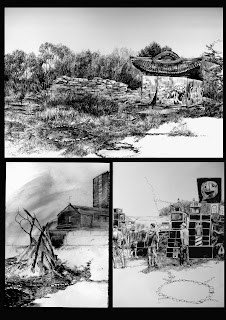 AS: You’re a fan of Ballard; does literature play a part in your working process?

LOF: Ballard has been hugely influential to me. He’s like an installation artist in the way that he can set a scene so that you can really visualise it. I’m often less interested in the characters and plot; I read him more for the visual images that come from his work.

AS: I wanted to ask you about class because it seems strong in your work but I get the impression it's a taboo subject right now and invisible in contemporary art.

LOF: I think you're right in the sense that it has become unfashionable to talk about class. It’s something New Labour have distanced themselves from in their new branding process. We’re supposed to believe that there’s no working class and that we’re all middle class but the actual issues of class war, to me, in my lifetime, have never been more pertinent. The society we’re living in now is so polarised and divided.

AS: It’s not that class divisions have disappeared, but the focus seems to have moved to broader issues of globalisation.

LOF: I think people are prepared to talk about developing countries and the Global South and use terms like that and talk about how everybody in developed countries is in a privileged position. But obviously it’s not that simple. I think there’s a consensus that says it’s vulgar and unpleasant to talk about class; it’s bad form.

AS: You’re passionate about social injustice; how much did growing up in Halifax contribute to your political views?

LOF: I grew up in Yorkshire in the 1970s and 1980s when a particular moment of class conflict was being played out in a very dramatic manner, especially in 1984 when it came to the miners’ strike. It felt like a really important battle and it turned out to be so and that battle was lost. That was a pivotal moment and, in a sense, what I’m doing with the work, the aesthetic of the work and the ideas I’m talking about, is locating myself back in that moment as if to activate a certain current or sense of agency that was felt by many people then and who subsequently feel brow beaten and defeated, having lost it all in the 1990s. 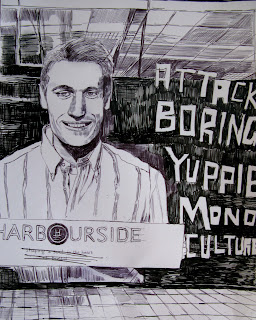 AS: When I see the term YUPPIE in your work, it makes me want to snigger; it seems so dated.

LOF: Yeah, we don’t call them that any more. There are so many different words for them.

AS: So what is a YUPPIE to you? 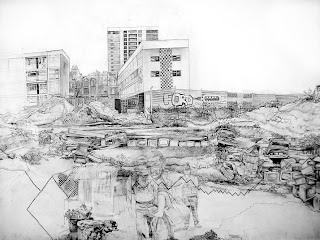 AS: Most of your work is set in London; have you made work about Halifax?

LOF: Well, the thing is I want to and I have tentatively started to make work about Leeds. I’ve lived in London for 15 years so there are various places where different parts of my life have been played out. When you come to London you can adopt different personas. You can be anybody and you can act up. But when you’re in Yorkshire, when you’re at home, you’re vulnerable. It touches on something of your childhood and your adolescence and sometimes it’s too emotional. But that’s not to say I’m not going to do it.

AS: How do your activities as artist and activist combine or are they separate?

LOF: As an artist, the politics are inextricably tied to the way I engage with the world. And the things I’m interested in are influenced by my socioeconomic position in society. It’s an inescapable thing. It’s just having the desire to express the way that I see things and having the freedom to do that in the work that I make. On a personal level it feels like a really important thing for me to do. My ambition for the work is to be an artist who contributes to some sort of critical milieu - just being present and saying these things. 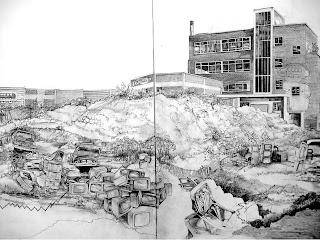 AS: You’ve been making biro drawings recently, are you doing any painting?

LOF: Actually, I want to start painting again. I’ve really missed it. I’m involved in this project 2013, Drifting Through The Ruins and the ballpoint drawings work well to articulate ideas I have of ephemeral places. Ballpoint pen fades and the stains of acrylic paint gave it a sense of translucence and patina of slight decay. I’m doing a series of new drawings for The Armory in March. They’re related to the psycho-geographic engagement with the city but I’m going to be looking at Paddington and Kilburn. To make them as paintings would carry too much weight. But I actually love painting. Not in the way some people do, like they get obsessed with the physicality of making. I’m not a painterly painter but I enjoy constructing the images and taking time over them and working in that way. I’ve already got plans for a painting show - but I can’t talk about it. 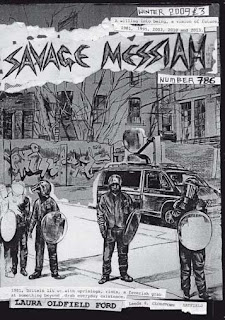 Savage Messiah zine is available at: