Laura Lancaster talking to Alli Sharma at Tyneside Cinema, Newcastle Upon Tyne, about her concurrent exhibitions at Workplace Gallery and the Laing 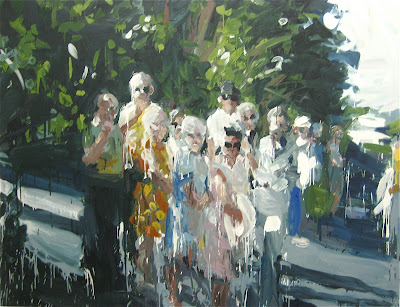 AS: Your paintings and drawings work well in Workplace Gallery, particularly upstairs in the attic.

LL: It’s quite ghostly up there and suits the imagery. I work from photographs and slides of strangers that I find on ebay or at Tynemouth market. Sometimes I find batches of photographs or a whole album or one half of a photograph where the other half has been torn off and thrown away. It’s the idea of rescuing and putting them back in circulation again. 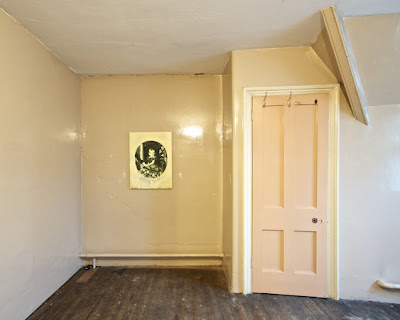 AS: Are you quite detached from them, as it’s not your own family?

LL: They’ve been taken for one reason but then thrown away so there’s a redundancy or failure about them, because they’re not with the right people any more. They remind you of something but you don’t really know who they are. I’ve done a series of about 200 drawings from one photo album. It’s one woman’s life from when she was 2 until she was 60. It’s a really odd photo album. I made the drawings on the blank pages from old books. So I was using two found things at the same time and just concentrating on that. I wanted to make a piece of work that took a long time to finish. My paintings are fast so I wanted to make something that took a long time and I spent more time looking at the images.

AS: How do you make choices about the images you work with?

LL: Sometimes I try to paint an image and it doesn’t work, then I’ll try a collage and it works. Particular imagery adds something. I think it must be to do with the colour or composition. Sometimes I get it wrong and think ‘that was a really good image, why did it not work’. I like the process of discovery rather than illustration. Francis Bacon talks about the nervous system. It’s more direct than the concept. The concept comes after. It tells you what the concept is. You can’t ignore more conceptual work, but it’s finding that space that is particular to painting. It’s reactive, you react to something and that tells you something, and you react to that and it’s like a big snowball. It’s an exciting way to work. 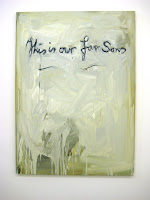 AS: The text paintings could have been the backs of photos?

LL: That’s where the images came from. It was the idea that you could view the images like that, just like a statement. What if you could just do a painting of the statement?

AS: You could have just written it out, but you’ve spent time going over it, crossing something out, going over the line on the bottom, smudging that, pushing the paint around and getting it right in paint.

LL: I think it’s quite intense, because lettering is a fine line and you need to be able to read it to some degree. I can strip it down but then I’ve got to get it to do this thing that looks like an ‘r’ but then it’s doing it’s own thing and you coax it round a lot more. An image can be more of a mass than a line. Also, there is more of the idea that the reader ought to be able to read it, whereas with an image its more guess work and it could be something else, more abstract, so there’s a different relationship there about precision. But then you’ve still got the same gloopy paint that you’re trying to get precision out of. It’s new territory, so they’re exciting to make, when you don’t really know how you’re going to do something, because there are no habits there. Like the pencil drawings, but then it’s also quite scary because it could look terrible. 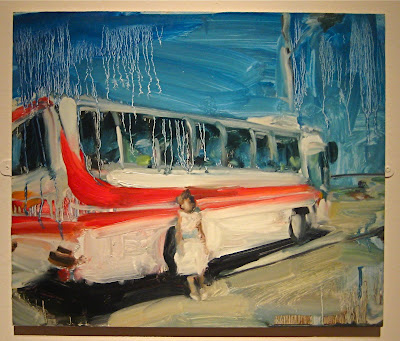 AS: The painting of the bus reminds me of going on a trip to Blackpool. There seems to be a social history documented in the work. 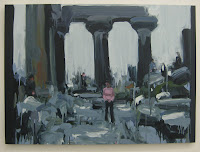 LL: They do remind people of their own things. People respond saying ‘oh I had that jumper’ or ‘that’s like my dog’ that kind of thing. I thought it was interesting that a lady is standing by what looks like the Acropolis, a really old monument, with it’s own history, and then this person is making a claim on it by having their photo taken with it. It’s a really odd thing that people do. There’s also an odd sense of scale in those paintings, which I enjoy. The people are quite small.

AS: You’ve increased the scale of the paintings themselves quite a lot.

LL: I was aware that the space at the Laing is big and that my work might get lost in there, even though you need a certain amount of space around the work. And I had some funding towards it, which helped. The timescale was short so I worked quickly and didn’t have time to be precious about it at all. It can be difficult to know when you’re finished. Sometimes, you can do just a little bit more and it can make the painting feel a lot less fresh. The Laing paintings erred on the side of under-doing it. It took maybe two sessions for each one. I spent a long time mixing up paint in big pots, probably about 20 or 30 different colours. The actual painting was quick.

AS: Did you have a few things on the go at once?

LL: I did one at a time, because I needed so many brushes and pots. I have a big studio but they need to dry flat. I want it to feel like it’s all come out at once. It’s hard to describe. But almost like it’s made itself and you get all of those lovely accidents. Once it’s dried, you basically have to paint it again. 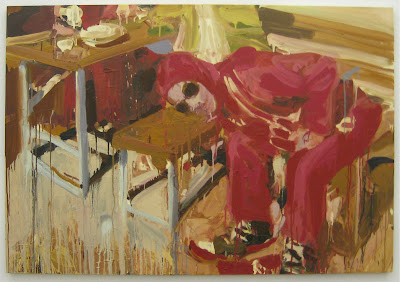 AS: The painting of the skier is a strange one, with the goggles.

LL: Yes, in the paintings downstairs at Workplace, the eyes of the subject look back at you. Usually, in my paintings, the subject is either looking away or is less defined. I’ve been drawn to images that are looking back. I don’t know why. The graphite pencil portraits are about that gaze. I don’t etch like that much. They’re different to my normal drawings. They look like they’re the opposite of what happens in the paintings. 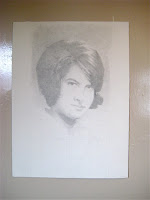 AS: Your drawings are very precise and obsessive, whereas the paintings are fast and loose?

LL: Again, that idea, wanting to draw in that detailed way, cross hatching, it’s about using the same mark, it looks quite soft but it’s the grade of the pencil. Using cross hatching instead of thinking, ‘that’s hair I’ll use this kind of mark’. Chuck Close talks about painting being like knitting a sweater, where each mark is the same, making something with the same unit. It’s quite different to my painting. It’s like doing something opposite in order to see what the connection is. It opens the image out and makes it 3D again, like you’ve removed the photograph and gone into the image. And being life size, it’s weird when you’re drawing and you realize the drawing is looking back at you. I think they’re more about my experience of making the drawings, whereas the paintings are more in relation to the viewer. 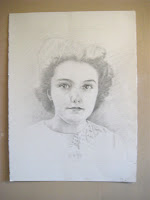 AS: So your relationship to drawing is quite different to painting.

LL: The drawings are obviously more slavish to the source. The painting is more about the push and pull between the paint and the image and that classic thing of it being two things at once. I’ve been making the drawings for 2 years but I couldn’t work them out because you have an idea of what you’re doing as a painter, and then this throws you off course. Maybe it gives depth and in the long run it will come round and make sense.

AS: It’s interesting about time issues between the two ways of making. Once the painting is finished, there’s nothing more to do with it. It can be made in a few brushstrokes which can be incredibly satisfying and then nothing.

LL: Maybe the pencil portraits are a way of extending that. Then you’ve got a weird relationship to time because the photograph was taken in an instant and you’re spending hours trying to recreate that instant but it’s odd because the person is sitting still, so there is a lot of different time going on. It’s interesting when you do something and surprise yourself. It tells you to do it and it’s good to follow that. Sometimes you have to work your way through things.

AS: Do you apply that way of working to your music and song writing.

LL: I’ve only been writing songs in the last 8-10 months but I’ve been in instrumental bands for the last 10-12 years. MeandthetwinS are my sister, Rachel, Paul Smith and Narbi, the drummer. Paul has been working with his band, Maxïmo Park and doing his solo stuff, so the rest of us formed another band, Chippewa Falls. I’ve just started another band with my boyfriend and the fourth is Silver Fox. Each one fulfills a different side of my personality. It’s like collage, drawing and painting.

AS: Do you do different things in each band?

LL: I sing in Silver Fox and play guitar in the others but they’re all different styles. Silver Fox is new. It came out of a semi-drunk conversation about there being no bands that were all women. So we formed a band and did a fundraising gig for the Star and Shadow Cinema in Newcastle. We did cover versions and thought that we should write our own songs. It just sort of happened. It’s more collaborative than painting or drawing because you can take a little seed of an idea and give it to someone else and it changes, it seems to inform itself. You each chip in your ideas and it becomes a whole new thing. 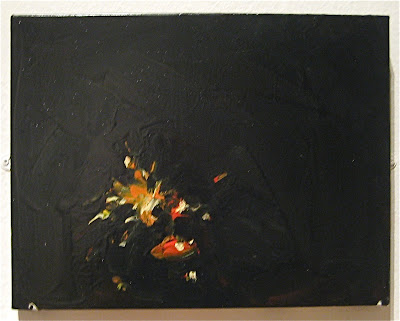 AS: Your playing tonight? Is it local?

LL: Yeah, at The Head of Steam, opposite Central Station. That should be fun.

AS: You enjoy performing?

AS: Does the title of your show ‘We are A Movement’ come from a song?

AS: But you don’t title your paintings?

LL: Generally no, I want them to feel open, rather than vague, so I thought if I titled the whole thing then it’s more about the whole practice than the individual pieces of work, a kind of overview. There’s the idea of things being quite fleeting. I like a title that brings people in a bit. 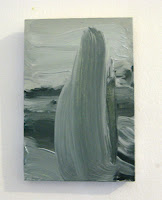 AS: Is it important, to you, to make the work accessible?

LL: I want to invite some sort of reaction, but not necessarily the same ideas that I have. That’s where I get lots of ideas from, how people misread things. When I’m doing the songs with the band, I find it really easy to write lyrics. I don’t have to think about it, it comes quickly, but it’s different when titling the paintings. It feels like you need more reasoning behind it, whereas the music is more of a feel. I write lyrics on my phone all the time, and put it together to make songs. It could be interesting to bring the two approaches together, perhaps being a bit more instinctive.

Posted by Articulated Artists at 02:53 4 comments: