I come to Jasper Joffe’s studio armed with a voice recorder that doesn’t work. The following is a reconstructed conversation, which Jasper agreed was ‘a good re-creation of the ideas'. 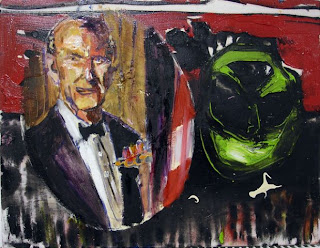 MM: Your paintings have changed quite a lot over ten years.

JJ: Yes. I’ve tried to make one body of work look the same as another, but somehow I can’t do it. I get bored. I get bored of going to the studio every day, mixing colours, painting pictures. I love painting, I just can’t do the protestant work ethic, although a lot of the artists that I admire work in that way, six hours in the studio every day, like going to the office. The 24 paintings in 24 hours was a way to demonstrate that it’s not the amount of labour that is lavished on a piece of work that determines how good it is. A painting that is done in an hour can be as good as something that has been painstakingly painted over a long period of time. 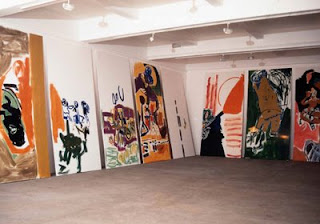 MM: Your practice includes curating as well as painting. Does that keep the boredom away?

JJ:I think so. It was another way of creating a whole world of art as I see it. I don’t always agree with the way that art is perceived or treated by critics or curators, and I wanted to create a world where the kind of art that I liked was included. Why would I stick to only making paintings when I could make a whole world? It’s just because I’m so full of myself.

MM: Do you think that when your work changes it is because you get bored with doing the same thing over and over?

JJ: I’m quite an argumentative person. If somebody says something, I take the opposite view, just for the sake of a good argument. Maybe it’s the rebel in me, that makes me want to do the opposite of what I’ve done before.

MM: You’re having an argument with yourself?

MM: So really that amounts to quite a coherent philosophy then, if you decide that your working process is to constantly present yourself with the challenge of doing something different each time. At the same time you are quite hard on the paintings you have done before? 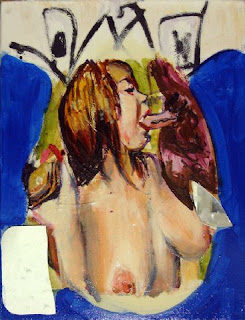 MM: The Himmler painting works on a similar level. I’ve seen the original photo, where the look in his eyes is one of vengeance and arrogance. You have painted him in a rather loving kind of way. 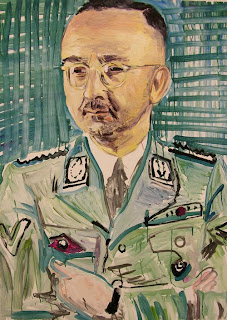 MM: The bodies you painted in the Buck Naked series were very different in style. They have more of a comedy element to them than the porn-paintings, and less focus on emotional expression.

JJ: I painted those bodies from my head; they are the people I see around me. When you think about how you see people, there are always some things that are emphasized and take over. I was just fascinated by the people I see around me here in Dalston, on the bus, what people do to themselves, how they treat themselves, the way black women straighten their hair and so on. I drew them, and filled in with colour – I guess that’s what makes them so cartoony.

JJ: There is nothing that is holy anymore that they can really engage with. I suppose I really would like to be religious in a way, although I’m not at all. I like to believe in really big things, like big art or big love. But people don’t treat it that way. Not religion, not sex, nothing. Children perhaps, but I don’t really want to go there in my artwork. I don’t want to touch any of that stuff, children, paedophiles or terrorists. People are angry enough with me as it is.

MM: But I don’t see your work as being linked to fads in politics. There are some things that remain constant throughout.

JJ: Yes, that is true. It's always the same, women, Nazis, sex, death, mess. And beauty.

Posted by Articulated Artists at 15:05 5 comments: