Paul Johnson talks with Nick Nowicki at his studio in Poplar, East London 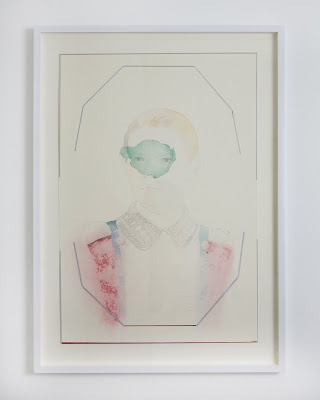 PJ: I grew up as an oil painter, graduated from Glasgow in a painting school, but I never really wanted to pick up a brush, or start mixing paint. I was always trying to work out how I could construct a painting; how I could handcraft it. I started to formulate glass-paint and spray it onto cut-out pieces of paper, which I used to build up collages. I don’t really know what I’m going to get until I start putting it together. There’s a slight uncertainty with spraying, because you don’t have complete control over spray. As your consciousness kicks in, colours change and shift with your mood, so if someone ends up with a green chin for some reason, I allow that to be part of the making, as opposed to ‘Oh no, that’s gone wrong.’ So, in a way, I do feel a bit like a painter at times.

NN: The drawing of the soldier looks like you’ve painted it with watercolour daubs.

PJ: Some artists go through a process of simplifying things as they work through their career. I’ve found what I’ve done is complicate things and added more and more. They’ve ended up becoming more layered and more ‘painterly’ through the making. This green bit is tracing paper that I’ve sprayed and then placed on top, and the rest is sprayed by sectioning parts off. If it’s not right, it’s sanded away. Glass-paint has a stiffness, but I use it so lightly it’s almost like a dusting. If this was a watercolour and you didn’t like a certain section, or if you wanted to shift it once you’d put the paint down, obviously you’d be adding water or you’d be using a sponge, but for me, I’ll be getting out the sandpaper. It has similar possibilities where I can eradicate or keep things in. Again, it’s like a constructed watercolour. Physicality always returns in the work at every stage. 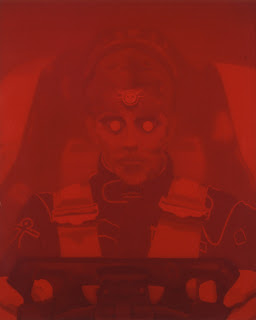 NN: When I first saw your work in 2003, you were physically covering up your collages with red polypropylene.

PJ: At that time, I was trying to contain physical worlds, and it felt like the process needed to be contained as well. But I had backed myself into a corner. I thought, ‘What next? Do I just stay here, hermetically sealed, or do I try to navigate my way out?’ I remember an artist coming to my studio and he put me on the spot. He looked at my collages and said ‘Why would you want to cover them up?’ I think strangely that comment triggered something I was already thinking, but wasn’t yet prepared to do. Like any artist, you make dumb decisions sometimes, and I made a series of yellow ones, and a series of clear ones, and the collage was still all sealed in. But the polypropylene had become an effect, as opposed to an integral part of making an image. Then I made a piece called Girl that felt integral, all the components felt right, and it only had one bit of plastic on it. It had elements of the red polypropylene series but felt like a whole different beast. The discs, that had been sheeny and covered, suddenly allowed their physicality to be seen. There’s still an element of containment, but it’s about her visual containment. For me, this was the key piece to move on and bring in elements that I was interested in. 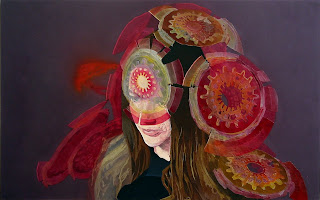 NN: Talking about the presence of the poly-propylene, that's a strong artistic presence. You were very present within that work, as the keeper at the gate. And you are still present once that's gone, because of the way that it's been visibly crafted. I think you are strongly involved in my perception of the work.

PJ: I think that’s definitely a point. I was interested in that sense of clarity; when you think of something and you have the sudden urge to physically make it. I love that intention and I think the handmadeness of what I do, and the level of labour, speaks of the obsessional. Potentially, there are so many easier ways to make an image, and I end up giving myself a hard time. My Dad joked, ‘It’s probably ‘cause you’re Catholic, Paul. It’s probably just your upbringing.’ That I feel I need to go through this cathartic kind of thing each time.

NN: Could you go into more detail about finding the images, and the compulsion to make a particular image into a portrait?

PJ: It’s normally about being switched on, and looking, but the trick is not being conscious of looking. So, throughout your day, you’re susceptible to seeing things, whether it’s a bit of newspaper on the floor, an image on the internet, television, or an image of someone I’ve seen and sneakily taken their portrait. I put the found image on the studio wall and it lingers for five or six months. I keep looking at it on a day-to-day basis, and normally it’s this funny process of there’s-something-about-you-which-I’m-unsure-about, which turns into a compulsion to make an image of that person. But if I forget that it’s there then I just leave it. 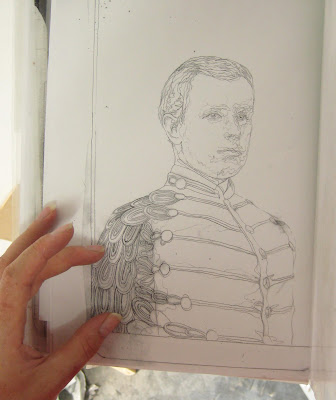 It’s a slow process, and maybe a head will come from somewhere, a uniform or costume might be sourced from somewhere else, and then I’ll start to piece them together using drawings and photocopying. Fictional things then happen, and it becomes this person whom I try to present as if they are real.

NN: Because you’ve spent so long lovingly crafting them, it feels to me like you love these people.

NN: But in actual fact you don’t know them. They don’t even exist. 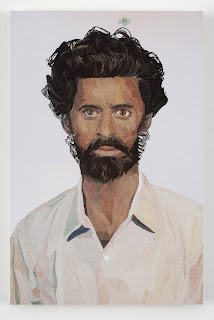 PJ: No. There is a distance. I found an image on a boat in India, and after I’d made it into a portrait, The Lookout, people were saying ‘Who is it?’ and they wanted me to describe him, as if he was someone I’d had some sort of contact with, but the strength of the work is that there’s, hopefully, a mystery. That is something I’m interested in. How much do you believe and how much don’t you believe, and the space between.

NN: Is it a literal translation of the photo?

PJ: The photo was black and white, quite an old photograph in a Victorian frame. I’m projecting colours onto him, as if to give him some sort of vibrancy - a lot of images I’ve used are black and white or drawn from a photocopy and I add colour - to make you think about him as someone potentially real, or to give him a feeling of something quite current. I don’t want him to feel like he’s a Victorian photograph, or he’s from another century. His hairstyle and beard seem to allow him to be in this current day. I picked up another few photographs, and the rest looked like they were from a particular period of time, whereas he seemed timeless, as if he could exist then and now. When they are stuck in an era that’s when I lose interest. If I can convert them into feeling present, rather than past, they become familiar, as if you could tap into what that person is feeling, or the thought-pattern behind the eyes.

I’m hoping some sort of fragility is communicated through the image. And also I have actually described them in the past as being a sort of family of people, not in a traditional sense, but in the sense of disparate people coming together, through some sort of shared belief.

PJ: Yeah, and the work went through a point where the cultish element started to creep in, but now I’m more interested in the work being ritualistic without the symbolism being directly placed upon it. Venus Passing The Sun might feel like a ritualistic object, but it’s not explicit. There’s an attempt to make it more suggestive. 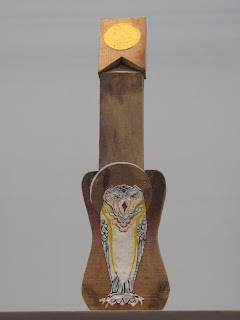 NN: Are you using your imagination more?

PJ: I think so. I’m just allowing things to seep in. Maybe I’m going through another transition. You always evolve as an artist, you’re always sort of moving. For instance, with this most recent one, I had the title in my head for years. It’s quite a tragic title, Portrait of Someone Slowly Drowning, and I remember thinking how would you go about visualizing that title. At the same time, I was interested in how I could pattern the surface around a portrait, but without it simply being some sort of decorative device. Instead of the background being blank, I wanted to fill it, so it’s almost as intense as the actual person, almost as if it’s whirling or swirling round that person. And in a practical way, I literally made him in bits. His mouth and his chin I didn’t really like, and in a spontaneous way I put him on in a temporary way without the bottom half, and instantly thought the image was enough. It feels like this portrait is almost being sucked into some kind of mental schema that’s floating around him, whereas in my previous work, it’s always a symbol or something physical floating over, something that’s real and tangible, but not actually there. This feels much more fluid. It’s got this crazed pattern, but it’s uncertain, and it’s clear, and you think you’re looking at particular things. Someone described the lower half as being like some sort of water formation, or some kind of crustacean, and I like that it’s suggestive, but doesn’t become definite. 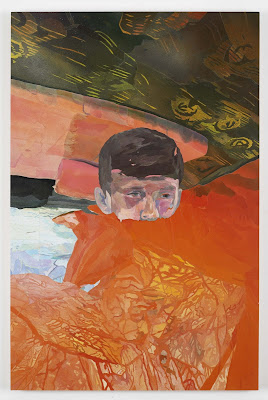 NN: The abstract part could be part of him, like a body under a sheet, or it could be seen as a nervous system.

PJ: Ah yeah, something biological. I think that’s where the collages are starting to head. There’s openness to interpretation as opposed to a definite kind of badge, or symbol, or object floating over the top of someone. All artists make a body of work, and then they just reach that point of ‘Mmmm, what’s that one about?’ It feels like a bit of a jolt, but that’s really exciting. This feels like another evolution, a personal evolution with making these collages, and it’s good to let them grow.

Images courtesy of the artist and Ancient & Modern, London.

Posted by Articulated Artists at 03:31