Phillip Allen talking to Alli Sharma at his studio in Dalston, E8 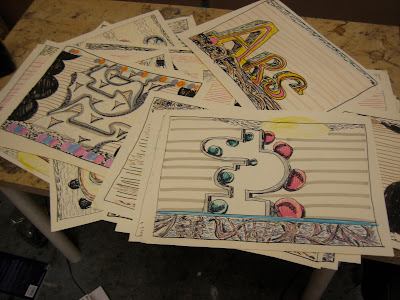 AS: You've just come back from The British School at Rome.

PA: I’ve been there since the start of this year. I made some paintings, which have gone to a show in Bologna, and I did piles of drawings.

AS: There are familiar shapes and objects that crop up in the drawings.

PA: Yes, sometimes things appear, sometimes I make something out of something I’ve made before. How these worked is that I was out and about in Rome with a small book. I hadn’t worked like that before.

AS: It looks like a comic book; the way you’ve framed them.

PA: It was just a way of getting them down on a page. That framing has existed in the work one way or another; it’s an instinctive thing. Then, I quite literally work my way through these into felt tips. When you first move into your studio there’s that horrible thing about being in a white empty space. I didn’t do much work for the first three or four weeks. I thought I needed to fill the space up to feel a bit more at home and so this process evolved. I put things up and thought ok, this is mine, I can relax.

AS: Do you get a room to yourself.

PA: It’s an old place that looks like the British Museum. There’s a courtyard, then 8/9 artists are down one wing with your bed upstairs. Then there’s the library where the academics are. It felt like an open prison and a retirement home. You feel imprisoned, but you can go out and see Rome and do whatever and talk to the academics. That was fantastic. I spent a lot of time asking them things

AS: Did the trip have an impact on your practice?

PA: Maybe the things I did there had a superficial impact. I was out with my book because, in a sense, I had to; that’s what I was there for. Maybe the point is that there is no impact. I’m sure you’re affected by the experience but it wasn’t a hunt for something. It’s the people you meet which is the real thing; to meet others and to see what they’re up to and all of those things. 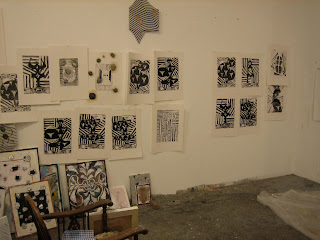 Have you been productive since you got back?

PA: I’ve just started these prints. I came back and didn’t really want to paint. A few years ago I did some etchings and making prints has always been at the back of my mind. I was wondering what to do with the drawings and whether they were for printing or whether they were things for other ways of making work. So I’m in a real ‘I don’t know’ phase. But it’s nice to make and produce things and then, once you’ve got all the things in front of you, begin to think ‘right what am I doing’. 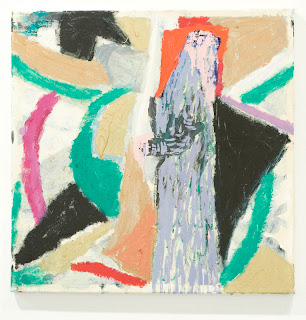 AS: The paintings you showed at Transition recently looked like something was being worked out on the canvas.

PA: They were made over a long period of time; that extra bit of whatever that I do alongside the main body of work.

AS: Do you go back and add or alter them over time?

PA: No, I make them in one go. I think once you begin to go back then it turns into something else. They’re things that can’t be re-done. They’re outside of the other bit of my practice. But then, once they’re seen, they get absorbed as part of your practice.

AS: Were you easy about showing them; if you put them to one side then is that because you don’t want people to see them. 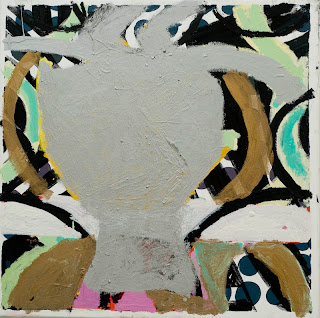 PA: I think they were put to one side because I hadn’t worked out what they were. Jake Clark came round years ago and we were talking about them. Then I began to think about them. But it’s one of those things, as soon as you begin to think ‘I’m going to make one more’ then you can’t because, once you begin to conceptualise them as your work in that way, then all this other stuff comes in and it begins to turn into your work. In a way they were always detached or a different aspect. I began to think that I needed the main work, say The Approach show, to make sure that these other things exist in the way that they are surplus to the main body. But as soon as the surplus becomes the work then it alters. So I don’t know what I’ll do now. Once it turns into a work then it changes, it loses something at the same time.

AS: Your drawings; they’re something else too.

AS: That happened at your show at The Approach, you reached the end of the paintings and arrived at a wall of drawings. And you could match them up. So I was wondering about the process and I was a bit disappointed that the paintings had come directly from the drawings.

PA: I came into painting at art school doing that hard won image thing where you have a blank surface and then you’re painting and, through the process, something appears. I worked like that for a long time but I found it a frustrating process because nothing ever did happen. The mythological, hard won image never appeared. I was also questioning the whole notion of painting being this autonomous thing. And so the way I solved this problem was to know what to paint. The drawings came from that; from thinking that I needed to know what to do because, for my own personal state of mind, I can’t just approach a blank canvas. For a long time I felt that I didn’t want to show the drawings alongside the paintings, because once you show them you begin to demystify the whole process, and then I thought, well so what.

PA: Painting isn’t a mystery. It can be quite a pragmatic thing. You can still approach a painting in the same way, but it’s come from this; this is its real source. The paintings aren’t made in a kind of Jonathan Lasker way where I photocopy and blow it up. They’re drawn then painted. Other things happen, slight variations, but I need the drawing in front of me. 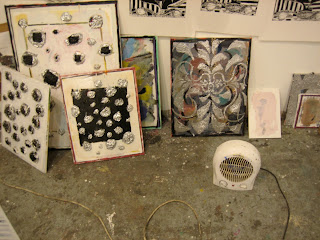 AS: Your combination of colours, with gold and silver can be quite, well, I love the word vulgar, but I’m hesitant about using it.

PA: I like the word; you won’t offend me. I guess they come from the felt tips. I’ve used a lot of silver. It’s enamel paint. I think I like it because it’s not oil paint.

Studio images courtesy of the artist.

Posted by Articulated Artists at 08:28