AA: I'm looking at your painting there on the wall; is it Franz Josef?

EM: Yes, he was the last Austro-Hungarian emperor, the last of the ruling Hapsburgs.

AA: You use the Hapsburg hat motif in your work and I was wondering what took you to the Austro-Hungarian Empire.

EM: That's not an easy question to answer. We had family interests in Austria when I was a child and my mother was interested in history, but sometimes it's just poetry. I remember crossing Charles V bridge in Prague when it was just opening up and there was this poetry in the name Charles V which I vaguely remembered from my mother talking.

AA: There is a kind of romance about that.

EM: I started exploring Charles V and then the Hapsburgs who followed and then it began consolidating around this particular period of history just prior to the First World War.

AA: You have an interest in fairy tales too, what came first?

EM: Well I think the fairy tales came first although it's always been at a distance. I don't immerse myself in romanticism or fairy tales. I'd feel uncomfortable with that. There's always this distance in the critical position I'm taking. I was initially attracted to the Northern European fairy tale tradition. The Brothers Grimm obviously represent the Germanic Teutonic position and I was interested in the purpose that fairy tales might serve. It's complex but there is something about that era, in the nineteenth century, where there was a renewed interest in fairy stories and a reconstructed nationality. It was manufactured, it wasn't genuine - if that is ever genuine. It was political, it was part of the romantic movement and there is something about Franz Josef which encapsulated that; he was a kind of woodcutter prince. 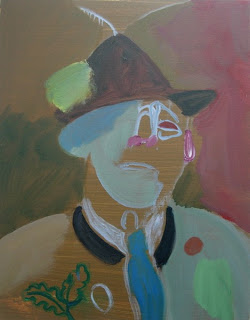 AA: Manufactured also in the way he looks; his uniform.

EM: Well he used to dress increasingly in folkish costume, what they call a loden jacket.

AA: He reminds me of the von Trapp father from The Sound of Music; and again in your painting Austrian Man.

EM: I painted Austrian Man at the same time. I'm curious about the stories that we construct about ourselves as a group. The creation of this jolly grandfather figure and his beautiful wife, Sissy, who died quite young. It is both patriarchal and matriarchal and quite oppressive for both of those things. It weaves this fiction over an era and a people, a fiction which we often choose to believe because it's easier. Weaving is a good word because it smothers, like cloth - a maternal crafty thing. I'm also interested in the stories the British have constructed about themselves.

AA: Are you thinking about the stories we make about ourselves in a psycho-analytical way?

EM: I would say yes, but in a more generic way. The way in which whole nations or groups can split off the unacceptable bits of themselves. The thing that intrigues me about this jolly gentleman, which you see represented all over Southern Germany and Austria with a feathered hat and a drink in his hand, is that he looks so anodyne, like he wouldn't hurt a fly. So there's the creation of that but there's the other side too. We know that people hurt each other and we know what people are capable of and there is a denial and a discomfort in bringing the two things together. Then there is a moment, like the First World War, when the fiction is blasted out. I'm not saying that modernity and the great war were truer than the fiction; they were just another fiction, but they represent something quite dark. That is what fairy tales do. They allow the bad things to seep into our world. To take that into painting, I think my own painting tries to find a way through quite cosy and comfortable scenes - to find a way to puncture my painting habits. I think that painting is the site of a personal struggle with patriarchy and matriarchy; it's not just in the subject matter.

AA: So when you have, for instance, this smiling image of Queen Elizabeth II, you're trying to get to the power of her in Fancy Queen with Orange Lips.

EM: That image comes from a photograph by Cecil Beaton where she is set up in a sort of Gainsborough way. I've done lots of queen paintings. They are also a site for a similar struggle where I want to break through. I want to make paintings of women where they are actually shouting. The queen paintings are not always queens, they are all sorts of women and making them break through and make some impact is hard; it doesn't go with my character to do that. I have a tendency to want to keep faces out of paintings and I used a modernist device, the mask, to do what masks are for, which is to make an impact, to speak. Perhaps we need a mask in order to speak out.

AA: When you talk about the women shouting, the red and purple that you use in Bet/h I helps. By comparison the stick princes with their funny hats in your paintings look weak.

EM: That is part of it. There is something quite mask-like about those paintings. I was thinking of Bette Davis as Elizabeth I. 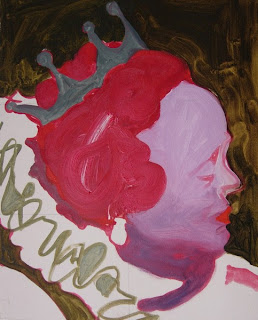 AA: There's something about that hairline set right back, like a mask it doesn't look quite attached.

EM: Maybe power is always assumed or mostly assumed, worn rather than something that we naturally feel.

AA: Like the wizard of Oz with this big production then the person behind working the larger thing.

EM: The wizard of Oz is very male - that power. The stick princes are rather ludicrous. Maybe my project about the queens is doomed. Maybe power is always ludicrous. I don't know, there is an ongoing problem with the queens.

AA: What do you mean, problem?

EM: They're not coming easily. I did wonder whether they're too didactic and I suppose the idea behind them was very simple and I wanted them to be quite simple paintings. The woman finds her voice through joining with some kind of masculine element, which might be the mask, I don't know. The masculine element is phallic in a very loose use of the word. The phallic could be a voice, which penetrates through the sound.

AA: Like your painting Vita Sackville West and the cross dressing - an assumption of the masculine being a more powerful voice. What painters do you look at?

EM: I like loads of painters. I just like anything that I think is good painting. Merlin James, Paul Housley, Alex Katz, Armen Eloyan. I've just seen a terrific show by a young artist who won a prize at the John Moores, Grant Foster. I suppose with the interiors the person that is in my mind is Vuillard because I'm trying to get his sense of claustrophobia which is to do with patterns. The patterning is synonymous with the maternal. When I was in the show at East I painted the grandmothers' houses. All the houses were different, suggesting a generic thing which should take it into the realm of ideas and what we fantasise and what we fictionalise and then you start thinking what are the elements of that and why. But I think it was too easy to walk past and not ask questions and just see paintings of pretty houses. 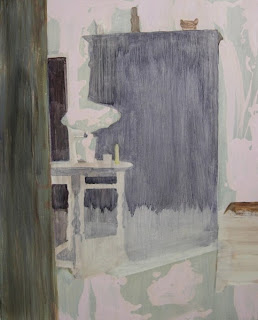 AA: I like the idea of the house being a refuge but also smothering. That somehow the family is a safe thing but it is a place where there is power and different elements played out. The fairy tales and the empire stories have similar characters or structure.

AA: Yes, or the grandfather figure, these overpowering figures but referring back to this idea of being smothered and too much decoration, too much cloth.

EM: There is this ambivalence all the time because I long for the homely and all those kind of things and at the same time struggle to be free. You see this all the time. My friend just had a baby and you can see the dilemma in the baby. You see it rigid with the desire to move and it can't yet and it's fascinating because it seems that the human being has two conflicting needs. I suppose that is what always has to be going on in my paintings.

AA: Do you work from images?

EM: I do quite a lot although sometimes I work from my head. Mostly I'm thinking about things and then I think I need to find an image like that. Because I enjoy painting I have a fairly loose relationship with images. I take images and adjust them to the point where I've got them where I want them. That works because I make an awful lot of work. Going back to the idea of something erupting and destroying the status quo, for me the image has the same kind of smothering quality. It is very hard for me to work against an image - it's chipping away at it and poking it and I think it is something to do with my own struggle to break away from these authoritarian things.

AA: To make your own thing from it. Do you keep at it until you have something or do you think 'no, that's not it' and start again?

EM: At the moment I'm trying to stick with things and hammer them out. It's always research - how would it be if I did it like this - I never seem to get on a roll.

AA: It sounds like you wouldn't be comfortable if you became too comfortable.

EM: So it leads to a very bumpy ride. Part of me longs to find the way of making paintings and of course there isn't one way. I feel like a swarm of bees in a general movement. I do have a lot on the go at the same time. There's always something I fancy having a go at. I decided that as I was going to be spending a lot of time in the studio it's got to be enjoyable - and it has become more and more pleasurable.

Eleanor Moreton's work can be seen at:
Creekside Open 2009 until 24 May. http://www.creeksideopen.org/.
'Home Truths' at Harewood House until 5 July. http://www.harewood.org/
Ceri Hand Gallery in 2010. http://www.cerihand.co.uk/

Posted by Articulated Artists at 09:41